2 Chicago Police officers shot, one dead, one fighting for life

Two Chicago police officers were shot in the line of duty Saturday during what the Chicago Sun-Times called a “traffic stop shortly after 9 pm.” The shooting occurred on Chicago’s South Side.

The dead officer, Ella French, 29 had given birth two months earlier. She was described by Mayor Lori Lightfoot as “very young on the job, but incredibly enthusiastic to do the work.” The other officer according to First Deputy, Eric Carter, “was fighting for his very life.” 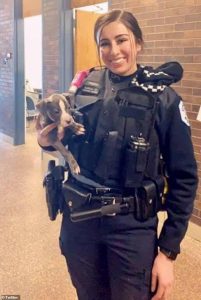 The officers were able to return fire, wounding one suspect. Two suspects were nabbed shortly after the incident. Remarkably, the last report of an officer being killed by gunfire in Chicago was Ofc. Samuel Jimenez, who died after responding to a domestic disturbance in November 2018.