A beginner’s guide to purchasing a firearm for self-defense

People around the country are finally realizing something gun owners have known for decades: You are your own First Responder, because when seconds count, police will be there in minutes.

After police officials in several states warned the public that they need to arm themselves because of the coming loss of thousands of officers who will either quit or be fired for refusing vaccinations, many holdouts finally accepted that they may need a firearm for self-defense.

The response from the rich and famous was to hire private security, which can cost thousands of dollars per month, but the rest of the country is figuring out it could be on its own.

Over the past few months, I have received hundreds of emails from new readers asking the same question: What gun should I buy to defend myself and my family?

Here are some options, but to be clear, opinions on defensive firearms tend to differ considerably. None are gospel, including mine. Please do your own research. Your local gun dealer is a good place to start. Before you plunk down your hard-earned cash, ask yourself a few questions: What do you want the firearm for? Do you want a weapon for home defense? Do you want a firearm for concealed carry? Do you want one for both?

For me, telling someone what firearm they should buy is like telling them what shoes they should wear. One size does not fit all. I strongly recommend purchasing a quality firearm from a quality American manufacturer. Pick a model that fits you best. You will discover that prices will vary considerably, but this is not the time to bargain shop. You’re buying something to depend on to save your life or the lives of your family. How much is that worth?

I prefer a full-size handgun, but I’m big enough to conceal one. Most hold plenty of ammunition, and they’re easier to control. Nowadays, there are a lot of tiny handguns on the market that are extremely easy to conceal – “pocket rockets” you can hide in a pair of gym shorts. The problem is that these small pistols are not easy to operate even for an experienced shooter. It’s hard, at least for me, to get a good grip on a tiny pistol, so they’re more difficult to control. If you want to carry a concealed handgun, I recommend splitting the difference – finding a pistol small enough to conceal, but one that’s not too small to operate easily and shoot accurately at distance.

Some brands to consider are Glock, Sig-Sauer, Smith & Wesson, Beretta, Walther and Heckler & Koch, but there are many more. Choose a model that fits you the best.

In a defensive situation, shot placement is far more important than caliber, but I steer new shooters toward 9mm. It’s readily available – at least it used to be – and recoil is minimal, making it easier to control.

Some shooters prefer revolvers. While I am not one of them, I would never dissuade someone from purchasing a wheel gun, if that’s what they want. However, capacity is usually only six rounds and reloads are slower and require a lot of practice to master.

I’ve written entire columns on how to best carry a concealed weapon. There are a lot of gimmicks out there, but for new shooters, I recommend a Kydex holster worn on the shooter’s strong side.

The shotgun has been the reigning home-defense king for more than 100 years. While I happen to believe there is a better option, millions of Americans still rely on a shotgun to defend hearth and home. A shotgun offers devastating firepower. One round of 00-buckshot sends nine .32-caliber projectiles downrange at around 1,300 feet per second. At close range, the wound channel this creates is horrific.

While a hunting shotgun will work for home defense, their barrels are usually too long for close-quarters work and they don’t hold enough ammunition. I recommend a tactical shotgun for home defense. Most have increased capacity and an 18-inch barrel. Anything shorter – for a standard shotgun – requires a permission slip from the ATF.

Dispelling all the myths associated with this weapon could fill several columns. Suffice it to say a shotgun still needs to be aimed, despite what’s depicted on TV. It won’t wipe out an entire room with one pull of the trigger, and the ka-chunk of one being racked has probably never scared off any bad guys.

Good brands to consider are Remington, Benelli, Winchester and Mossberg. Again, find one that fits you best.

Shotguns are classified by gauge, which is an old system based on the number of lead balls that can fit in the barrel that together weigh one pound. The smaller the number of balls, the bigger the diameter of the barrel. For example, the 12-gauge – the most common shotgun – is bigger than a 16-gauge or a 20-gauge.

The smallest shotgun, the .410, uses caliber instead of gauge to measure the diameter of the barrel, which I believe was done just to confuse new shooters.

There’s always been a lot of talk about the recoil or kick of a shotgun. You’ll feel it, but I’ve never met a new shooter who couldn’t handle it.

I prefer a carbine for home defense over a shotgun. It’s much faster to reload than a shotgun, weighs half as much and holds 30 rounds, as opposed to six or eight shells. An AR is a precision weapon, which is important when there are family members at home. Because a carbine is more ergonomic, I find it easier to maneuver during CQB than a shotgun. It’s also easier for female shooters to operate.

One good feature about a carbine is its ability to accept accessories, namely lights and electronic sights.

A defensive firearm requires defensive ammunition, which is designed to expand upon impact. Target ammunition does not expand, which can lead to over-penetration concerns. In other words, don’t use target ammunition for defensive work because it can go through your assailant and into the next room.

Defensive ammunition is about twice the price of target ammunition, but it is worth the added cost since it is more reliable and less likely to over penetrate.

I strongly recommend lights on tactical weapons, especially handguns. Most defensive encounters occur at night, so you will need a light to identify the threat before you pull the trigger. There are several brands to consider, but I’ve found that Surefire and Streamlight are the most reliable. Here’s a tip: Buy a light for your handgun before you order a holster, since most holster manufacturers have models available for handguns with mounted lights.

I recommend red-dot sights on tactical carbines. A red-dot sight is infinitely faster than standard iron sights. It allows you to focus on the threat, rather than aligning the sights to the target. In my humble opinion, this is as important a purchase as your carbine, so don’t skimp. Cheap red-dots will fail when you need them most.

Aimpoint, EOTech and Trijicon have models that are proven in combat, but be careful. The market has been flooded with Chinese counterfeit sights. You don’t want to pay a lot of money for a fake Chinese sight. Order from the manufacturer or a trusted retailer, not Amazon.

Keep in mind that once you’ve purchased a defensive firearm, you’re only half done. You need to be trained by a professional firearms instructor. Fortunately, we live in the Golden Age of firearms instruction. Never before have we had such a knowledgeable and professional instructor cadre. It’s never been easier for a beginner to learn how to shoot the right way, or for a seasoned shooter to improve their skills. 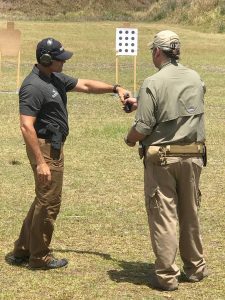 I train every day – dry, at home – and it doesn’t cost a dime. Dry firing at home is crucial to maintain your skills. It allows you to practice what you learn from your instructor at the range in the privacy of your own home. Make sure you observe the fundamentals of firearms safety. Your instructor can assist you in planning safe and effective dry-firing sessions.

Welcome aboard! As a new shooter, you will find that most seasoned shooters are welcoming and quick to offer help. That’s one of our strengths. If you have questions, just ask.

Safety is paramount when firearms are involved. The best shooters are the safest shooters. Learn and practice safe gun handling, which over time will become standard practice, and please don’t hesitate to send me an email if you have any questions.