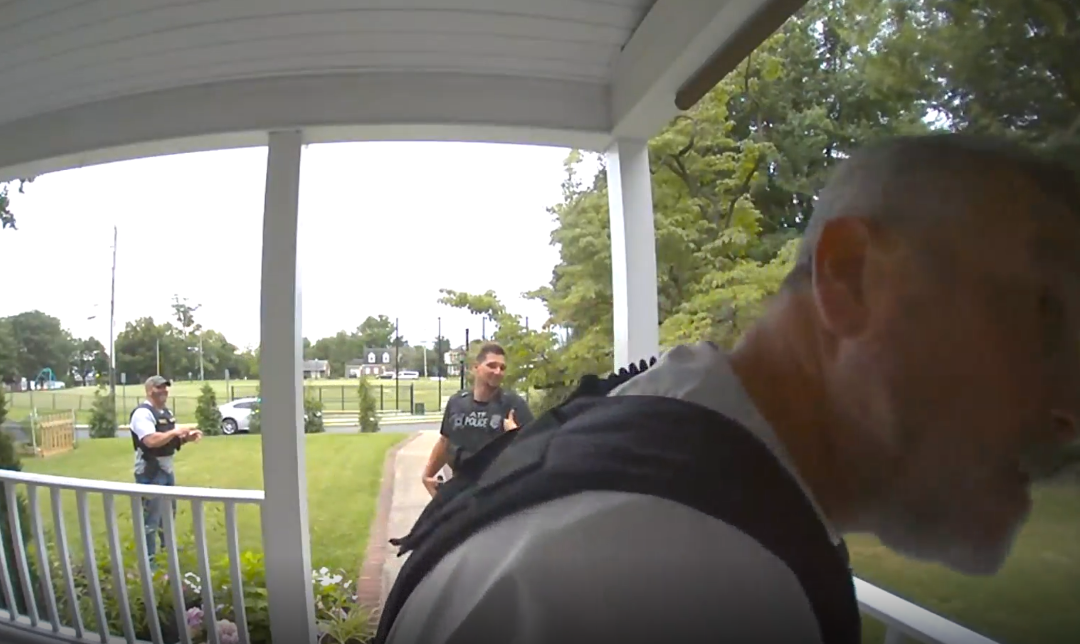 Now, ATF’s PIOs are answering questions from the national media and an irate Montana Congressman. Before, the PIOs didn’t even answer their phones.

The story chronicled the plight of a law-abiding Delaware man, who asked that his name not be published. Two ATF agents and a Delaware State Police trooper showed up on his front porch – unannounced – wearing tactical vests, t-shirts and dirty jeans. They pleaded with the homeowner to show them several of his firearms. One of the agents told the man they were investigating whether he had committed a “straw purchase,” since he had bought seven firearms since January. If they could just see his guns, they said, they would leave immediately and not have to return. They did not have a search warrant.

The homeowner’s security system captured a video of the encounter.

To be clear, no one from ATF commented for the story prior to publication – neither the Resident Agent in Charge of ATF’s Wilmington, Delaware field office, nor Amanda Hils, PIO for ATF’s Baltimore Field Division or anyone at ATF’s headquarters in Washington D.C.

Things changed on Tuesday after the story was published. Hils issued a quick statement:

Good afternoon, Lee — Thank you for reaching out and I appreciate your patience with my reply. ATF does not release the process in which it conducts investigations.

I hope you have a great day.

Both the Washington Times and the Daily Caller began asking ATF questions about the incident. The ATF sent them similar statements:

According to the Daily Caller:

“A spokesperson for the ATF said they ‘are unable to comment on the details of any ongoing investigations; however, interviews are an entirely appropriate part of the investigative process for any law enforcement agency.’”

Wednesday night, Mils sent another statement describing the process ATF uses to conduct investigations, which she had previously said was secret:

The Delaware State Police partners with the Bureau of Alcohol, Tobacco, Firearms and Explosives (ATF) via a task force model to help combat gun violence in our state by investigating potential illegal gun purchases made by individuals on behalf of others who are prohibited from purchasing or possessing firearms, also known as straw purchases. At times, this leads to interviews conducted by task force officers, which are non-custodial, voluntary interviews done in full compliance will all applicable local, state, and federal laws. ATF and DSP remain committed in our mission to reduce violent crime and help make communities safer.

The story caught the attention of at least one Congressman. According to the Washington Times, Montana Republican Rep. Matt Rosendale was not pleased, and he wants answers:

“The ATF must answer questions on why they decided to conduct an illegal search, especially since the homeowner had done nothing wrong. These actions by the federal government are unsettling, and they have no business going door-to-door to see who owns firearms. I fear that there will be more illegal inspections to come as the Left continues its assault on our 2nd Amendment rights. Congress should investigate this immediately.”

When he learned about the possible congressional inquiry, the anonymous homeowner said only, “Hell yes!”

ATF’s claim that these task force interviews are “voluntary” is laughable. Most folks are not attorneys, so when three armed men wearing tactical vests show up on their front porch unannounced, they don’t realize they can tell them to leave and slam the door.

ATF is using the public’s legal naiveté to their advantage. In fact, they’re counting on it. This is not law enforcement. It’s intimidation. The Delaware homeowner had done nothing wrong. He had the financial means to purchase a few firearms, which is a constitutional right guaranteed in the Second Amendment, so he bought a couple guns. This is not a crime – at least not yet.

That fact that ATF declined to comment about the Delaware encounter because it was an “ongoing investigation” is ludicrous. What federal crime did the homeowner commit? Is there a Grand Jury investigating his lawful firearm purchases? Does he need a lawyer? If the agents had actual probable cause he committed a crime they would have brought a search warrant, rather than a page from an illegal gun registry.

It should come as no surprise that this encounter came just a few days after ATF’s new director, Steve Dettelbach, was sworn in. Dettelbach is notoriously anti-gun. When he ran unsuccessfully for Ohio Attorney General in 2018, he was endorsed by Barack Obama, Joe Biden and Everytown for Gun Safety. During his campaign for AG, Dettelbach called for reinstating the failed federal “assault weapon” ban and for universal background checks.

These warrantless home intrusions make it crystal clear where the new director is taking the agency. Under Dettelbach, the ATF is ready, willing and able to serve on the front lines of Joe Biden’s war on our guns.

Expect the worst and make ready.