Bill would stop U.S. Capitol Police from operating in Florida

Florida State Rep. Anthony Sabatini is worried about the politicization of American law enforcement – especially when the agency in not accountable to the public.

The conservative Lake County Republican is most concerned about the U.S. Capitol Police, which is opening field offices in San Francisco and Tampa, claiming that Florida and California are “where the majority of our potential threats are,” the USCP said in an email last month.

“The U.S. Capitol Police are even more directly controlled by political actors,” Sabatini said. “When you have Democrats totally in control, they’re more willing to politicize a police agency. The big threat is the politicization of all law enforcement agencies to the point where they become political actors.”

A special report published last month by the Second Amendment Foundation’s Investigative Journalism Project revealed that because the USCP is part of the legislative branch, which is exempt from federal Freedom of Information Act (FOIA) requirements, the USCP believes they too are exempt from FOIA. The agency routinely denies any inquiries from the public, and does not publish annual reports or investigations from its own inspector general. Congressional oversight of the USCP comes from four congressional committees, all of which are currently chaired by Democrats.

As a result, the USCP operates in secret and is not accountable to the public. It has little real oversight, given what’s been described as its “personal relationship” with members of Congress. And as it moves into offices outside of Washington, it will operate under a mandate that’s nebulous at best and controlled by the Democratic Party.

Sabatini’s bill, which is still being drafted, will prohibit state agencies from recognizing the USCP, and it will prevent the federal agency from acquiring property in Florida.

“We will pass a law saying we will not recognize them as a lawful law enforcement agency,” he said. “No political subdivision – cities, counties, law enforcement officers – can work with them or recognize or share jurisdiction. And the agency simply will not be allowed to purchase, rent or lease property in the state.”

“We won’t allow any state expenditures or communication with them,” he said. “Basically, they just won’t exist in our state.”

The USCP did not return calls or emails seeking comment for this story. 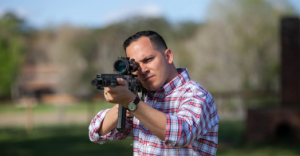 Sabatini, who is running for Congress, has one of the most conservative voting records in Florida. An attorney, Sabatini has filed lawsuits throughout the state challenging COVID-related curfews and mask mandates, and specializes in protecting the rights of small business owners. He has sponsored bills to make Florida a Second Amendment sanctuary state, to hold “Big Tech” accountable for censorship and to prosecute those who lie about their military record when running for office.

The Second Amendment Foundation’s Investigative Journalism Project wouldn’t be possible without support from you. Please click here to make a tax-deductible donation to support pro-gun stories like this.