In a tweet, SFPD releases a photo of a woman seen holding an AK47 while leaning out the window. Apparently, the photo was taken during an “illegal exhibition of speed event.” 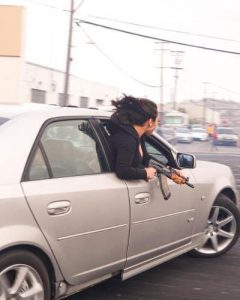 Later SFPD announced the car had been seized. As of press time, Armed American News can not confirm if the woman seen hanging from the window with the firearm, was apprehended. California has some of the most stringent gun control laws in the nation, including a magazine capacity limit and an ‘assault weapons’ ban.