Did you know your neighbors hate you?

Most Americans now use some form of social media in their daily lives and for the most part, use it wisely. Or do they? For the record, I am biased against social media in all forms and make no bones about it. Social media: Facebook, Instagram, Twitter, and too many local variations such as Nextdoor (which is the focus of this opinion piece) are nothing more than cesspools of hatred, in my estimation. I can visit any platform and eventually find some hateful morons arguing nonsense that devolves into an abyss of repugnance. It is my opinion that social media, combined with a 24-hour “news” cycle pushing a particular agenda (liberal) is doing incredible damage to the psyche of the nation and it may be irreparable.

Last night on Armed American Radio I read listeners a recent exchange I had seen on the Nextdoor app, which is designed to keep neighbors informed of the comings and goings in their area. Free things they’re giving away, welcoming newcomers, advice about auto shops, new restaurants, etc. Unfortunately, no matter the conversation, many will devolve into hate-fueled rhetoric about the state of the nation.

Oh, can it get ugly! In fact, I can’t think of anything uglier than someone wishing for the death of one of their neighbors because they hold different political viewpoints than someone else, however on social media, it’s a daily occurrence.

As I was flipping through the Nextdoor app trying to decide whether to place my old Dodge Ram tonneau bed cover on the site to give away, it happened, as it inevitably does. Here comes the thread that had devolved into a group of liberal, raging, maniacs berating all Republicans and anyone else who disagreed with their stand on mask mandates. The hatred was flying and I took the bait and began reading. What I saw made me jump in headfirst.

Two raging socialists, one man and one woman, were having the time of their lives going after anyone who disagreed with their opinions that anybody not wearing a mask or getting the jab was a murderer, hates their own children, and well, you get the idea. As I dropped deeper into this conversation I saw the first wish for death from the woman. Here’s the actual (edited) screen-grab: 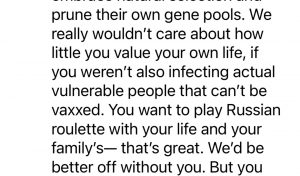 My response was immediate. “Did I just read you wishing death on one of your neighbors here on this public forum,?” to which I received no reply from the loudmouth punkette. I gave her a few choice words to which she never responded and moved on down the thread, but not before taking the screenshot.

Now keep in mind, this is a place for neighbors to find lost pets, introduce themselves to new neighbors, talk about places to go and things to do, and all the other stuff neighbors do for neighbors, but nope, as always happens, here come the militant leftists on the political attack.

As I did with the loudmouth screecher above, I engaged, asking if I just read his words correctly as he wished for the death of one of his neighbors, but not before grabbing a screenshot of this idiot’s post.  He responded quickly and it was game on. I was determined to put him in his place and make quick work of it. I was busy yet wasn’t going to let these two morons wish death upon their neighbors without making sure they were aware I was here.

Easy. See people like these two who get so enraged while on social media platforms make the huge mistake of forgetting they’re in a public forum. They forget that those who they are berating are, in fact, really, truly, their neighbors. They forget that they may have a business that readers of their hate might not patronize, if after all, the owner wished death upon them for their political views and they found out about it. They forget they are not anonymous and in fact are posting under their real names. They forget that within 30 seconds, a quick internet search provides virtually every detail of their lives, their social media accounts, spouses names, pictures of themselves and their kids photos, schools, etc. They also forget that they have employers, or in this case one was self-employed and that his customers and potential clients may be reading his hate-filled garbage. Same goes for the loudmouth militant female. To put it mildly, these idiots are not the brightest bulbs in the knife drawer.

So I did what needed to be done. I stuffed large, wet socks in their mouths and reminded them of their brainlessness. I reminded them I had screen grabs of their own words, with their names visible, and if they kept up their hatred, I would require them to defend it by putting up brand new posts, (not a buried string of replies), but brand new posts that go to every user with their own names visible including the attachments of their vile words, for all of the online community to see for themselves. I figure, most folks want to know just who lives down the street from them and what they really think should happen to them if they dare disagree with them politically. In this case, it’s their own death. One less of them to pollute the neighborhood.

Especially quick to tuck his tale was Trevor when I reminded him that his hate-filled rage probably wasn’t a smart move in the competitive real estate market in a very conservative area, nonetheless. (It took me less than 10-seconds to find out he is a real estate agent). Yeah he went quietly into the night. No doubt he’ll probably set up a fake account.

What does all of this have to do with guns and gun rights? It has everything to do with guns and gun rights. It doesn’t take a genius to figure out these people are also the ones who hate all of your other rights, including your right to bear arms. I don’t think that’s a stretch to assume. What’s important is to remember they don’t just hate your freedom, they hate YOU personally and when they get fired up and the truth comes out, they will openly wish for your death. Just another reminder of who we’re dealing with here.