The Senate gun control bill has hit another roadblock. Hidden inside the bill are items not related to the topic the of gun control

The text of the Senate’s bipartisan gun control bill was expected to drop Monday night, but talks are at a standstill over abortion-related language.

According to POLITICO, Republicans want the mental health section of the bill to mimic the Hyde Amendment, barring taxpayer funds from being used for abortions:

What’s the holdup? A GOP source familiar with the long weekend’s talks tells us that the Hyde Amendment, which bars the use of federal funds to pay for abortion, has come into play in the discussions over the bill’s health care provisions. Two of the most divisive and visceral political issues in the country – guns and abortion – could be paired together.

The lead negotiators on the Senate Gun Control Bill are Sens. John Cornyn (R-TX) and Chris Murphy’s (D-CT). Their goal of passing the legislation before Independence Day is in jeopardy.

The Senate is scheduled to take a two-week recess at the end of next week.

Their fear is political momentum for the gun control bill will die off over the break.

A Brief History on the Hyde Amendment 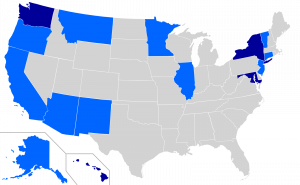 The first version of the Hyde Amendment was enacted on September 30, 1976.

This legislative provision put a stop to federal funds being used to pay for abortions.

There were two major exceptions within the bill for funding. 1) To safe the live of a woman. 2) The pregnancy was caused by rape or incest.

In 1993, president Bill Clinton signed into law the Departments of Labor, Health and Human Services, and Education, and Related Agencies Appropriations Act, 1994.

The Hyde Amendment was revised in the Act. Under the new guidelines the federal government could expand the categories of abortion the in which federal funds could be used. The funding dollars would be sourced from Medicare.

As of 2021, 17 states pay for abortions beyond the Hyde Amendment requirements. It is estimated that 20% of all abortions are paid for through Medicare.