The Florida legislature has a pest-control problem – it’s infested with RINOs.

Republicans have controlled the state House, Senate and Governor’s mansion for years, but Floridians still don’t have constitutional carry. The Gunshine State once led the nation in gun rights – we pioneered concealed carry, Castle Doctrine and Stand Your Ground – but nowadays, Florida has the most restrictive gun laws of any Republican-majority state.

Much of the blame for this can be laid at the tiny feet of former New York City mayor Michael Bloomberg, who in 2018 gave then-Senate President Bill Galvano $500,000, which led to passage of the “Parkland Bill” – to date, the biggest, most sweeping gun control bill in the history of the state. Once this and other contributions were outed by the National Rifle Association, all the Bloomberg funding went underground.

At the state level, the blame begins and ends with the Republican Party of Florida, which tends to forget about gun owners until primary season. While there are state lawmakers who deserve praise, there are more than a few who deserve blame.

To be clear, Rep. Cord Byrd deserves our praise, as well as the thanks of every gun owner in the Gunshine State.

Byrd has proven he can always be counted on to support our God-given and constitutional right of self-defense. He is a strong supporter of both the Second Amendment of the United States Constitution and Article I Section 8 of the Florida Constitution, and he has earned an A+ rating from the NRA.

When it comes to guns, Byrd has proven time and time again he is one of us and not a RINO, and I’m reasonably certain that when he cuts himself shaving, he bleeds Hoppe’s #9.

Unfortunately, none of that mattered to Luis Valdes, the Florida Director of the Gun Owners of America.

For reasons known only to Valdes, he singled Byrd out for blame Wednesday – posting an extremely offensive and naïve statement on social media: 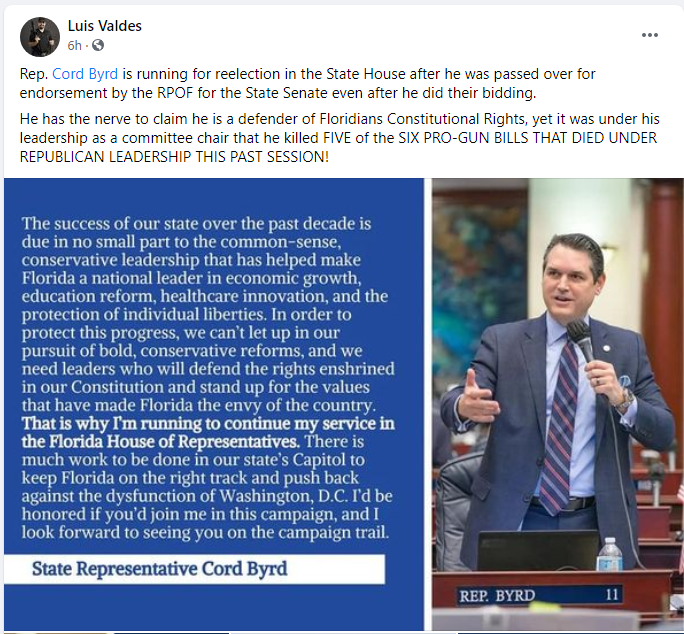 Personally, I’ve never met Valdes, although we’ve spoken on the phone a few times. It is important that he and other advocates who come before the legislature understand the legislative process, and Valdes’ ignorant post proves he does not understand the process. Even worse, he did a disservice to gun owners by attacking a trusted lawmaker – a true friend of ours – who champions the Second Amendment.

In my opinion, Valdes must think that by attacking legislators who have a proven track record of advocating for gun owners, he somehow gains street cred. In fact, all this does is prove he does not deserve the trust of gun owners or the ability to speak on their behalf.

Valdes needs to understand that limited committee time cannot be spent on bills that have no chance of passing. That includes bills that do not have a companion in the other chamber. Legislators must find a sponsor in the other chamber. When they don’t or can’t, the blame lies with them for failing to do their job, not with a committee chairman who has a duty to ensure that bills of other members who have done their homework are heard.

Valdes’ attack did not go unnoticed.

“When groups and group spokespersons, who don’t understand the legislative process, attack legislative leadership and committee chairmen who support the Second Amendment, they shoot themselves in the foot and do an enormous disservice to law-abiding gun owners,” said Marion Hammer, past president of National Rifle Association, current NRA board member and executive director of the Unified Sportsmen of Florida.

“It’s hard to call this friendly fire when it’s intentional,” said Sean Caranna, founder and executive director of Florida Carry, Inc. “This is a case of someone who cannot tell friend from foe. GOA has in the past and should do better. I am surprised at this short-sighted attack, and I call on GOA to get their house in order.”

A longtime Florida Carry member tried to talk some sense into Valdes Wednesday, but he wouldn’t hear of it and doubled down on the comments he made is his post. As someone who spent 20 years as an investigative reporter, I understand Valdes wants to generate buzz and possibly a headline, and he’s not the first to go after a well-known member of the gun community in the hopes it will create even more of a splash, but we have a hard enough time gaining friends in Tallahassee. Badmouthing our allies and holding them up for ridicule is naïve and counterproductive. While I am all-in on holding public officials accountable, you have to go after the right public officials. Let’s start with those who are anti-gun.

I have nothing but respect for Gun Owners of America, but clearly Valdes and GOA owe Byrd an apology. It should be public, heartfelt and it should happen most ricky-tick.