Let me start this with a disclaimer. I hate Twitter. I think it’s a cesspool of liberal hate and fear-mongering. One solid minute spent reading the tweets and responses and you’ll understand completely. I do not depend on it for my business, never have and I never will. In the last year, Twitter rat censors have cut my following in half and never seem to allow me over 5014 followers no matter how many new followers may pop up each day. I have had a Twitter account since 2009.

Having said that, I decided to follow their rules and apply for official certification. You know, the blue check thingy. My partner here at the AANews Division, Lee Williams, and I figured it would be fun to see how Twitter would respond being I’m an outspoken pro-gun, pro-right, pro-freedom, commie-hating, socialist-hating gun-grabber despising, conservative talk radio host and commentator who has attacked Twitter as being the cesspool that it is, on their own platform.

Regardless of all of that, I have never been taken down, suspended, canceled, or in any way have I ever officially violated their rules. I’ve simply spoken my mind. It is painfully obvious that Twitter does in fact eliminate followers. I’m living proof. Thousands of them have been deleted from my account over the past few years. Thousands, not dozens. Thousands. Seems funny to you? It did to me when several thousand were deleted over a one-day period alone last summer. In addition, as I mentioned, and this goes with that Fakebook cesspool as well, No matter how many people follow me (@aarmark), I’m always taking two or three steps backward on both platforms. This is also evident when taking Facebook into consideration. In particular, where I have over 85,000 ORGANIC followers (it used to be over 105,000). Organic means I have never paid for a Facebook like. Ever. Not ONE! These are true fans who follow the page on their own and weren’t brought to the page by me buying likes and paying the Social Media Lords. On the contrary. Facebook doesn’t want my money and won’t allow AAR to boost a post to be seen by many more of my own fans.

Twitter pulls the same BS, even though they claim not to. For example, when the AAR Video broadcast goes up each day on a Facebook platform with over EIGHT HUNDRED THOUSAND followers, we’re lucky if the social media devils let 200 hundred viewers know we’re even online. We see it every day. And it’s not just us. We’re not alone. In other words, they shadow ban us while claiming they don’t.

“People are asking us if we shadow ban. We do not. But let’s start with, “what is shadow banning?”

The best definition we found is this: deliberately making someone’s content undiscoverable to everyone except the person who posted it, unbeknownst to the original poster.

We do not shadow ban. You are always able to see the tweets from accounts you follow (although you may have to do more work to find them, like go directly to their profile). And we certainly don’t shadow ban based on political viewpoints or ideology.

Good heavens! First the “but.” Did you catch it? “We do not. But…..” That means they DO! Just as the FUDD who claims to “support the Second Amendment but…” You already know that means they do NOT support the second Amendment. Same with Twitter. If that doesn’t convince you, how about this little gem from up there in the quote, “(although you may have to do more work to find them…) In other words, they make it HARD to find you!

It’s laughable but why does it matter? It doesn’t, not to me anyway. I rarely use social media, can’t stand it, don’t understand why so many billions of people lay out their entire lives on these platforms that hate them, and become addicted to the tiny little cyber world as if it’s real life. It isn’t. Yes, I still have the accounts and will still post on behalf of sponsors, guest lineups and such but will never allow my radio broadcasting and real news media business model platforms to become dependent on these socialist, hate-filled tech goofballs.

That’s when Lee and I decided to put these clowns to the test. I meet every requirement to be certified and verified, according to their own rules:

First: “To encourage and maintain trust between users on the platform, you will need to confirm your identity with Twitter in order to be Verified.

You may choose one of three methods of verifying your identity:

Mission accomplished. That’s not hard to do as the business is legit, been around for 13 years and we met all of their ID requirements.

Second: “Your account must represent or otherwise be associated with a prominently recognized individual or brand, in line with the notability criteria described below. In addition to confirming the identity of the controller of the account, Twitter will Verify the following types of accounts based on the criteria described. In all categories, Twitter may independently confirm qualifying affiliation through business partnerships or direct outreach:”

They name three different categories and for the purpose of this column, I’ll limit the copy and paste to the TWO that clearly apply to AAR/AAN:

Activists, organizers, and other influential individuals: Outside the professional categories defined above, people who are using Twitter effectively to bring awareness, share information, and galvanize community members around a cause, to bring about socioeconomic, political, or cultural change, or to otherwise foster community, may be Verified.”

AAR CLEARLY falls under the “broadcast, cable, satellite, and streaming TV and radio news networks, stations and programs; digital news publishers; podcasts; and similar media,” as well as the secondary “people who are using Twitter effectively to bring awareness, share information, and galvanize community members around a cause, to bring about socioeconomic, political, or cultural change, or to otherwise foster community.”

Thirteen years on national radio, hundreds of radio stations, TWO national syndicated radio broadcasts, verifiable podcast with nearly 20 million downloads, 3 books, more affiliate radio stations than many of the “verified daytime talkers,” and a years long member of the Board of Directors for an “activist organization,” CCRKBA, they claim would qualify as a verifiable account by their own definition. 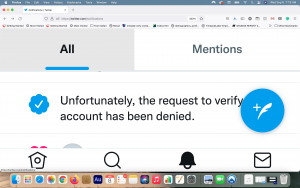 These cesspools of hate will see their day, I’m sure of it. The next billionaire is already born who will create the platform that relegates this technology to the dustbin of history. That day will come as sure as we’ll look back and say, “Remember when we used to use those old phones?” It’s the same with everything. In the meantime, I’ll continue to use their platforms…as little as possible… and against them whenever possible, until they either delete me altogether or I figure out that hate-filled social media platforms filled with raging, gun-hating commies, isn’t necessary when I actually talk to real people and reach millions without these clowns.

As far as Twitter goes? Since I actually DO meet all of their requirements and they give you no way to appeal their decisions, I’ll just have to assume it was something I said!

See ya on the radio, and oh BTW, if you want to toss it in their craw knowing they hate the right to bear arms, if you don’t already, make a statement and follow me @aarmark as long as I’m around!

About the Author: Mark Walters

Mark Walters is the host of two national radio broadcasts, Armed American Radio’s Daily Defense and flagship Armed American Radio, he is the co-founder of AAN, author of three books, and member of the board of directors of the Citizens Committee for the Right to Keep and Bear Arms (CCRKBA). Mark is the CEO of parent company CCW Broadcast Media, LLC