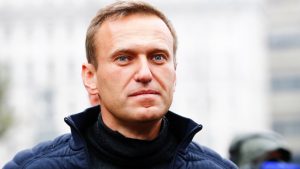 Not only is Navalny one of Putin’s harshest critics who has dedicated his life to fighting political corruption, he is very well respected and has millions of followers on social media both in Russia and the West.

Last year, Navalny nearly died after he was poisoned by Novichok, a powerful Russian nerve agent, which is only available from the Russian military. It took him more than a month to fully recover. Several agents of the Russian FSB were later implicated, but it’s abundantly clear Putin ordered the botched assassination. Novichok was all the proof needed.

Now, the Biden-Harris administration has weaponized Navalny’s poisoning in their unending war against American gun owners. On Friday, ostensibly in retaliation for Navalny’s poisoning, Biden issued an executive order banning the import of Russian arms and ammunition.

If Biden truly wanted to retaliate against Putin for trying to kill a well-respected dissident, all he had to do was freeze Putin’s bank accounts or slap him with travel restrictions. Putin is one of the wealthiest despots in the world, with scores of secret bank accounts scattered throughout the globe, and he’s an international jet-setter who enjoys the finer things in life, many of which are unavailable in Russian. Cutting off his funding and travel would have been a huge blow. Instead, the Biden-Harris administration issued this measly import ban, which hurts American gun owners far more than it does Putin. Besides, Putin didn’t make his billions hawking guns and ammo. He’s an oil man.

We are in the midst of the worst ammunition shortage in recent memory. Imported Russian ammo from Wolf, TulAmmo, Bernaul, Golden Bear and other firms offered some relief, especially the tactical calibers. Now, this will all be gone. The executive order starts Sept. 7 and lasts for 12 months.

In a previous editorial, I opined that former Obama national security advisor and UN Ambassador, Susan Rice, who now serves as Biden’s domestic policy advisor, is the puppet-master calling the shots in Biden’s war against guns and gun owners. The insidious nature of the administration’s new import ban proves it. It’s a cold, bold move – almost brilliant in concept and design – an action far too complex for Biden to have come up with on his own, especially now, as he’s reeling and hiding under a bed somewhere in Delaware because of his disastrous Afghan rout.

Through this ban, the Biden-Harris administration has sent a clear message to gun owners. The war against our guns is far from over, regardless of the fact that they just gave hundreds of thousands of real assault weapons to the world’s largest terrorist group. Biden’s goal is still 100% civilian disarmament, at least for us, not terrorists.