The Left Coast’s most petulant potentate, Guvnor Gavin Newsom, usually gives not a single farthing for the goings on of we common folk, especially after a particularly rowdy bunch tried to usurp his reign through a well-organized recall effort, which nearly cost him the throne as well as feasting at the French Laundry.

However, Sir Gavin took umbrage with a recent decision by the Supreme Court, so he proclaimed that the best way to teach these pesky justices a lesson was by flogging California’s commoners, again, with his favorite cat-o-nine-tails – gun control.

To be clear, Newsom is outraged that the justices let stand a Texas law, which allows private citizens to enforce an abortion ban, so he threatened to punish his own people with a law empowering Californians to enforce a ban on homebuilt firearms, parts kits and “assault weapons.”

“If states can now shield their laws from review by the federal courts that compare assault weapons to Swiss Army knives, then California will use that authority to protect people’s lives, where Texas used it to put women in harm’s way,” Newsom proclaimed in a hasty press release Saturday. “If the most efficient way to keep these devastating weapons off our streets is to add the threat of private lawsuits, we should do just that.”

In other words, the Governor of California thinks more gun control may force the justices to reconsider their opinion of a Texas law.

Newsom’s petulance knows no bounds. It’s as though decades of strong hair tonics and powerful pomades have addled his wits.

“I have directed my staff to work with the Legislature and the Attorney General on a bill that would create a right of action allowing private citizens to seek injunctive relief, and statutory damages of at least $10,000 per violation plus costs and attorney’s fees, against anyone who manufactures, distributes, or sells an assault weapon or ghost gun kit or parts in the State of California,” his statement reads. 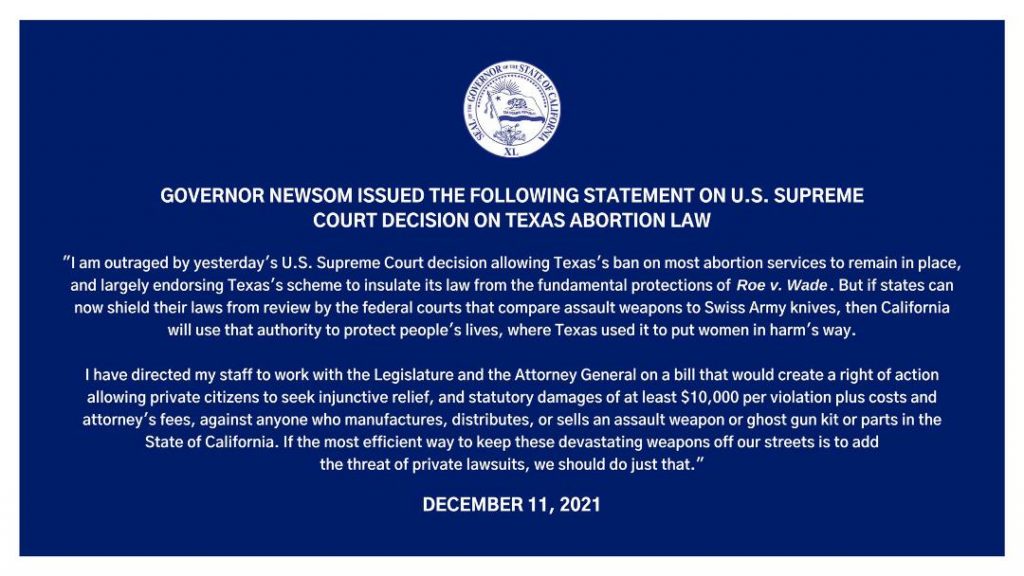 Clearly, the haircut-who-would-be-king is struggling for attention and relevancy. The one-time presidential contender is now the butt of too many jokes, most of which are uncomfortable and true. California is not the workers’ paradise it purports to be. Businesses and residents are voting with their feet and leaving in droves.

The hasty weekend memo says a lot about how Newsom thinks and reacts under pressure – immediately defaulting to more gun control as if it’s no big thing. Unfortunately, it says a lot about many Californians, too, and their willingness to tolerate this ongoing abuse of their God-given constitutional rights.

Some folks have written off California in terms of gun rights, which isn’t fair. There are many good people and active gun-rights groups operating there behind the lines. If history has taught us anything, it is that ultimately, freedom will prevail. We saw that in the former Soviet Union and its satellite states. We will see that in California, too.

Mad King Newsom of the Golden State cannot reign forever. All it will take is a group of souls who have grown tired of the type of tyranny exemplified in this case, where one man can impose harsh new rules on law-abiding gun owners just to garner a few headlines and make a political point.