The dilettantes at NBC News are aghast and clutching their collective pearls over a “Let’s Go Brandon”-themed AR lower receiver, which the good folks at Palmetto State Armory are calling the LETSGO-15. (MSRP is $59.99, and expect a 10-12 week wait.)

Dilanian was so upset over the naughty words and presidential affrontery he tipped off the Secret Service.

I called the Secret Service about this. They had no comment. https://t.co/CmcATXY5DV pic.twitter.com/vD7dblz9JG

Dilanian got to the bottom of the controversy, explaining in detail how the secret code originated:

The phrase “Let’s Go Brandon,” has become right-wing code for “F— Joe Biden.” It originated from a moment during an Oct. 2 NASCAR race at the Talladega Superspeedway in Alabama, when a driver named Brandon Brown was being interviewed by an NBC Sports reporter. A nearby crowd was chanting something difficult to make out, and the reporter suggested they were chanting “Let’s go, Brandon” to cheer the winning driver. But it became increasingly clear they were saying, “F— Joe Biden.”

For the mainstream media, no story about ARs would be considered complete unless the reporter mentions a mass shooting or two. Dilanian did not disappoint:

“Law enforcement officials have said that variations of the AR-15 were used in mass shootings at a Boulder, Colo. supermarket, a Pittsburgh synagogue, Texas church, a Las Vegas concert, a Florida high school and a Connecticut elementary school,” he wrote.

To be clear, Dilanian is not some kid or cub reporter. He covers intelligence and national security for the NBC News Investigative Unit.

That, friends, says all you need to know about NBC News and their Investigative Unit.

But Wait! There is More!

You guessed it! That too was lame reporting. 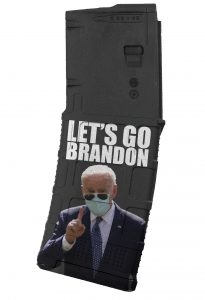 This “Presidential” PMAG is clearly a direct print and not a sticker.

Pick it up today from My Southern Tactical for a sweet $28. 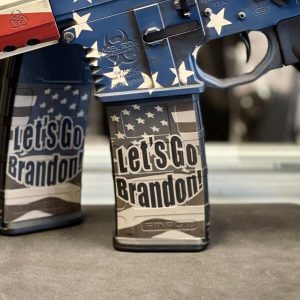 This stars and stripes adorned “Let’s Go Brandon” Magpul masterpiece is also not a sticker.

Pick up this freedom feeder from Shark Coast Tactical for $30. 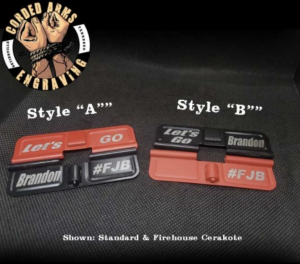 Pick up these freedom flaps from Corded Arms for less than $18.