No, we can’t donate guns and ammo to the Ukrainians. We checked

Americans have always had a well-developed sense of fair play. We root for the underdog. We scream at the TV when a referee makes a bad call, and we hate bullies of any kind.

There’s nothing fair about Russia’s invasion of its peaceful neighbor. The Ukrainian resistance – which includes old men and women, moms and dads, and even kids as young as 12 – is facing off against a modern army even though they lack air, armor or artillery support, reliable comms and even sufficient small arms and ammunition.

Still, the Ukrainians have been fierce. They’re sending Russians home in bags – a few thousand so far – with little more than rusty AKs and Molotov cocktails – a term that ironically was coined by the Finns when they were repelling Russian invaders from their homeland more than 80 years ago.

In the Ukraine, uncommon valor has become commonplace. The 13 border guards who were killed by Russian naval gunfire after telling the warship’s captain to have sex with himself turned their last post, Snake Island, into Ukraine’s Alamo. Those fighting for Kiev could face five brigades of Russian Spetsnaz.

As a free people, it’s natural for us to want to help the Ukrainians. After all, who wouldn’t want to stop Vladimir Putin and his stormtroopers before he escalates the conflict into World War III? The only question is how we can help.

Late Friday, it was suggested that I check into the legality of donating guns and ammunition to the Ukrainians. There is a precedent. During World War II, Americans donated guns to England. Besides, most of us have more than a few firearms we would be willing to donate to a worthy cause, and there are few causes worthier.

Unfortunately, I learned that unless Joe Biden’s State Department or the DoD get involved, it’s not likely to happen. 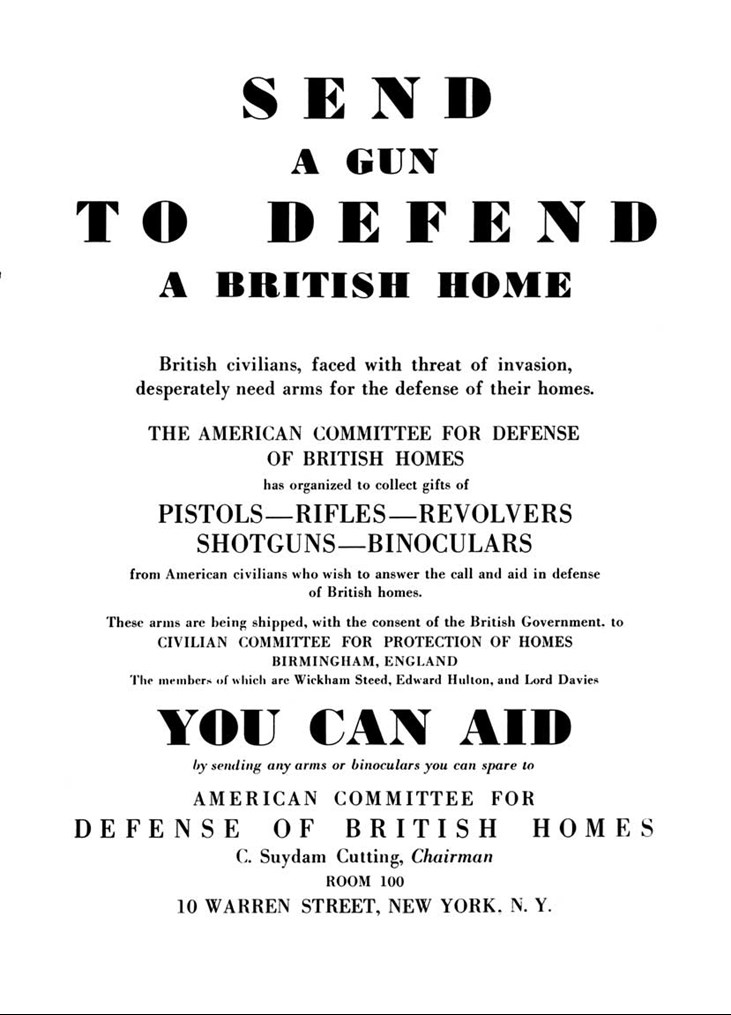 The American Committee for the Defense of British Homes ran this ad in the November 1940 issue of “American Rifleman.”

“The reason you can’t run guns into the Ukraine is the ITAR,” said Jim Dykes, a program director for a large defense contractor and an ITAR expert. “The ITAR (International Traffic in Arms Regulations) is a federal law which regulates the import and export of defense-related products including arms and ammunition.”

Getting the State Department or the DoD to approve anything, Dykes said, is “definitely a lengthy process.”

“Typically, it takes months not weeks for approval, and it can take even longer,” he said. “If you get approval, fine, but if you’re trying to donate guns to a country without going through State or Defense, you’ll run afoul of ITAR and risk everything.”

No firm capable of moving shipping containers full of guns and ammo would get involved, he said, absent official permission.

“If a company has ITAR approval to sell arms internationally and they try to deliver guns to the Ukrainians with going through the process, it’s highly likely that their international export licenses would be revoked by the State Department,” Dykes explained.

If only there was a fair-minded, freedom-loving public official who could help clear a path through ITAR and other federal roadblocks, then we could all give the brave Ukrainians a real fighting chance.

The Ukraine has learned the hard way the benefits of our Second Amendment and an armed populace. Firearm ownership was heavily regulated before the invasion. Civilians could only possess shotguns and hunting rifles. That all changed, of course, but only after the Russian bear started bearing down.

“We will give weapons to anyone who wants to defend the country,” Ukrainian President Volodymyr Zelensky tweeted Thursday.

We will give weapons to anyone who wants to defend the country. Be ready to support Ukraine in the squares of our cities.

AKs were issued to all comers at police stations and territorial brigade offices – the Ukraine’s home guard – and handed out “like candy,” one observer noted.

I sincerely hope no one is keeping records about who is issued the rifles. The last thing the country’s fledgling resistance needs is for Russian commissars to get their hands on Ukrainian versions of our 4473s.