Jared Gould is a man who enjoys shattering expectations. Where others see an obstacle, Gould sees opportunity. That’s a bold statement for the competitive shooter who is also legally blind.

Gould, and about 30 other competitive shooters, gathered at SIG Academy’s facility in Epping, N.H., for a two-day Adaptive Defensive Shooting Summit. The ADSS is an accessible shooting event for people with disabilities of all skill levels and knowledge of firearms. Participants take part in a full day of training with world-class instructors followed by a day of IDPA-style pistol competition.

“I love to shoot. I’ve always loved it, but I think the big thing is coming out with other individuals that have some disability, whether it’s vision – like I’m vision-impaired – or mobility or whatever, and everyone’s rockin’,” Gould explained. “It doesn’t matter. Their disability doesn’t stop them. Coming out here motivates me.”

The event is part instruction, part competition, part defensive shooting techniques and all confidence building. Each competitor learns to shoot within their capabilities, finding workaround solutions so they can shoot effectively and accurately.

“This is unlike anything else we do,” explained Aaron Williamson of SIG Academy, which hosted the event. “So to have the opportunity for these athletes to come in regardless of whether they are a veteran or somebody who got hurt doing something else, to get them in here, give them an opportunity to give them some training and actually run them through a match, for me, it’s probably the best match we do at the academy on an annual basis.” 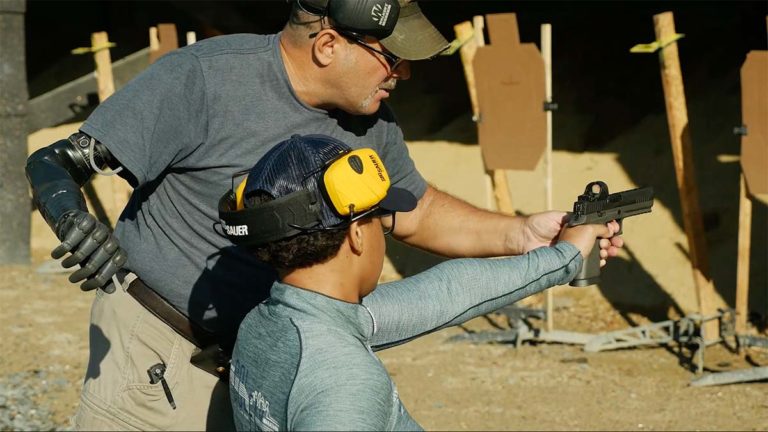 ADSS participants arrived at the event with their own spectrum of capabilities and experience levels. Some were shooting from wheelchairs. Others were mobile on prosthetics. Each faced their own set of challenges, but nothing was impossible to overcome.

“The goal of this is to get people out of the house, get them out to the range, get them a new support group, if you will, a new group of friends, that have a common purpose, you know, of getting out to the range and making matches and having a good time,” said Trevor Baucom, the ADSS organizer.

That starts with relearning the basics, but in a new way that fits within what each participant is capable of achieving.

“We’ve developed a curriculum that creates an opportunity to train dang near everybody that’s got a physical challenge and wants to shoot and shoot again to learn to live within their challenges and put it into practical application and function and realize they can still do this and do it well,” explained Rick Cicero, ADSS instructor.

Cicero knows. He’s not just an instructor, but also a double amputee, suffering the loss of an arm and leg. He sought to get back on the gun range through his own recovery, learning new ways to grip a firearm, reload and put lead on steel. For him, it was a matter of finding a new way and that’s what this match offers the participants.

“It’s frustrating at first trying to relearn, but the very last few shots we figured out what my problem was and it changed the whole game,” said Jataya Taylor, ADSS participant. “It’s exhilarating because I didn’t think we would be able to figure it out, so it’s just that rush of energy that I was looking for.” 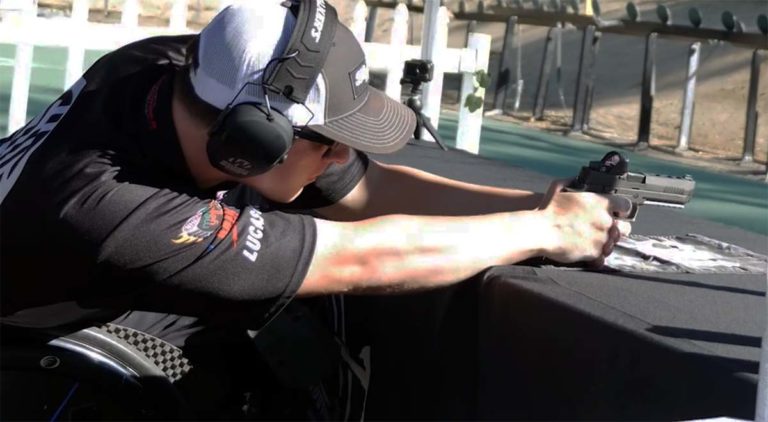 Match stages were designed to offer competition, a wide range of defense shooting scenarios and a challenge to novice and experienced participants. A mock gas station was constructed for one stage, a steel plate rack tested time and accuracy on another. One stage was designed specifically for low-light, making the participants test their confidence engaging glow-in-the-dark targets and another offered a series of home defense situations that ran the themes of Thanksgiving, Christmas and New Year’s events.

“To build a match that works for an adaptive person, we’re going to design our stages so that there’s very little movement,” said Chad Barber, the ADSS Match Director. “We’re not going to design stages with a high number of reloads. Simplify it and execute a phenomenal match.”

“Someone with a single-leg amputee compared to me in a wheelchair, or someone that might be a quadriplegic are all going to shoot differently, but every little thing can be pulled together and utilized to make your system work for you,” said Nicholas Fairall, ADSS participant. “I was an athlete before my injury and I always loved competing and having that competition mindset and the ADSS gave me that opportunity for it and gave me a great stepping stone to where I can get into the world of competitive shooting,”

While the techniques and the competition drove the participants for accuracy and better scores, the real benefit was how each participant was empowered, something that can’t be easily quantified.

“One of the most important and overlooked aspects of what we do is it helps build self-confidence and self-reliance back into a lot of these people who have been told ‘you can’t do this’ or ‘you can’t do that,’” Cicero said.

Baucom explained that the self-defense scenarios built into the competition inspire the participants that they are able to safely and effectively handle their guns in everyday scenarios. That builds confidence that they’re able to boldly re-enter life instead of being concerned that situations might be overwhelming.

The confidence boost translates to much more than shooting skills or self-reliance. It allows the participants to define themselves according to their abilities, and not be defined by their disabilities.

“A lot of times when you face injury, that door just slams on you,” Taylor said. “When you spend so much time looking at what you can’t do and looking at a closed door, you don’t see all those open doors and so being able to do something I did prior brings a little more of myself that used to be back. It’s hard to find that sometimes.”

“It creates a sense of empowerment because you’re like, ‘I can get back out here on the range and really shoot like I did prior to my injury,’” Fairall said.

Baucom explained that planning is already in the works for the next iteration of ADSS in 2022 and hopes to get more participants and grow the event. For more information, visit adaptiveshoot.com.