Life got a little busier and more interesting for Jason Wilson, founder and CEO of LUCID Optics, earlier this month, when Outdoor Life chose his B-8 8×42 binoculars for their list of the best new hunting binoculars of 2021.

A lot of people took notice, especially since some of the magazine’s other picks cost six-times more than Wilson’s binoculars, which have an MSRP of $679.

The Outdoor Life editors called the LUCID B-8s a “good value for the price.” That got my attention. Over the years, I’ve fielded a lot of reader questions about binoculars, so I reached out to LUCID Optics and asked for a pair of B-8s to review.

Wilson called me about an hour after I sent my email. Turns out he’s a great guy – a fellow shooter who gets it, and he really understands his customers. Wilson is about as far from a corporate suit as you can get. He strives to grow his company one satisfied customer at a time. LUCID, he explained, markets to the “mid-range” end user. Their products are lightyears beyond the cheap gun-show junk, but they’re less expensive than the über-premium brands. “They’re affordable,” he said of his product line. And like all of his products, they have a lifetime guarantee.

I’ve used and abused binoculars all of my adult life, as a street cop, for surveillance when I worked gangs and dope, as a hunter and at the range. I use my gear hard – binos included – and I’ve killed more than a few cheap pairs.

The LUCID B-8s arrived a few days after Wilson and I spoke. I was immediately impressed.

Over the years, I’ve seen too many writers gush about the greatest product of all time, at least until the next month, when their greatest-ever product was surpassed by another advertiser’s offering. Remember the Remington R-51? Some gun writers drooled all over that joke of a handgun, at least until Remington pulled it off the market because it was unsafe to shoot and fraught with problems.

I know full well that if I recommend a purchase, my reputation is on the line, which is the way it should be. Writers should take responsibility and be held accountable for their work product.

LUCID’s binoculars weren’t freebies, nor are they an advertiser. I owe them nothing. The company gives writers 45 days from receipt to write a review, and then the product must be purchased or shipped back. (I will be purchasing the ones they sent me.) 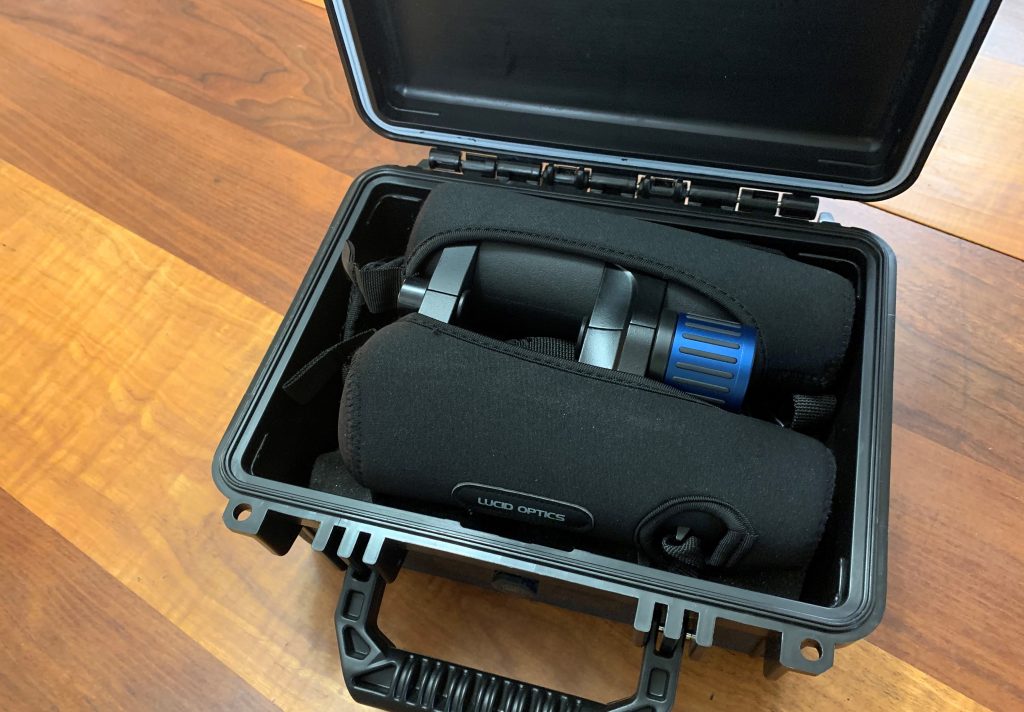 LUCID’s B-8 8×42 binoculars came packed in a waterproof hard-plastic box – which is similar to a Pelican case – cushioned with foam and protected by a silicone O-ring. It’s rugged as hell, and already solved one of the problems I’ve had with other binoculars, which got beat up and damaged in my bugout and range bags. LUCID’s hard case solves that problem.

Once out of the box, the first thing I noticed was the weight, or lack thereof. The B-8s only weigh a mere 24 ounces – that’s less than two pounds. Compared to other binoculars I’ve used, they’re almost weightless. For someone who has spent a lot of time wearing and holding binoculars, this is a major achievement.

The open-frame B-8s come with two neoprene covers, which are attached to the neck strap. These covers protect the binoculars very well, can’t get lost or misplaced, are quick to doff and don, and are infinitely better than the normal lens caps most binoculars ship with.

The neck strap is big, padded and breathable, a far cry from the thin straps that bite into your neck, which I was accustomed to putting up with. It’s got quick-release clips in both sides, and it’s fast to adjust.

I took the B-8s to the rifle range, kayaking and hiking through the high desert, from sunup to sundown. Temperatures ranged from 88 to 111-degrees. There was no humidity. I wore the binoculars constantly, throughout all of the tests.

At the range, the binoculars were perfect. I no longer need a spotting scope to check targets at distance.

I drug the B-8s through the sand and then dunked them in the river. The sand and water had no effect whatsoever. The lenses didn’t fog after they were dunked in the 65-degree water.

As expected, due to the B-8s light weight, I soon forgot I had them on, and they were small enough to tuck into my shirt when not in use. It’s an old habit. I’m not trying to avoid enemy snipers, I just don’t like binoculars bouncing around when I’m walking, and in my shirt, they won’t snag in thick brush.

The 8x magnification coupled with the 42mm objective were perfect for all of these pursuits. They gather light better than higher magnification; the clarity is simply amazing, and I like the wider field of view. The B-8’s twist-up eye cups are simple, quick and make them easy to use with or without glasses. The B-8s are incredibly ergonomic and very pointable, kind of like a good AR. 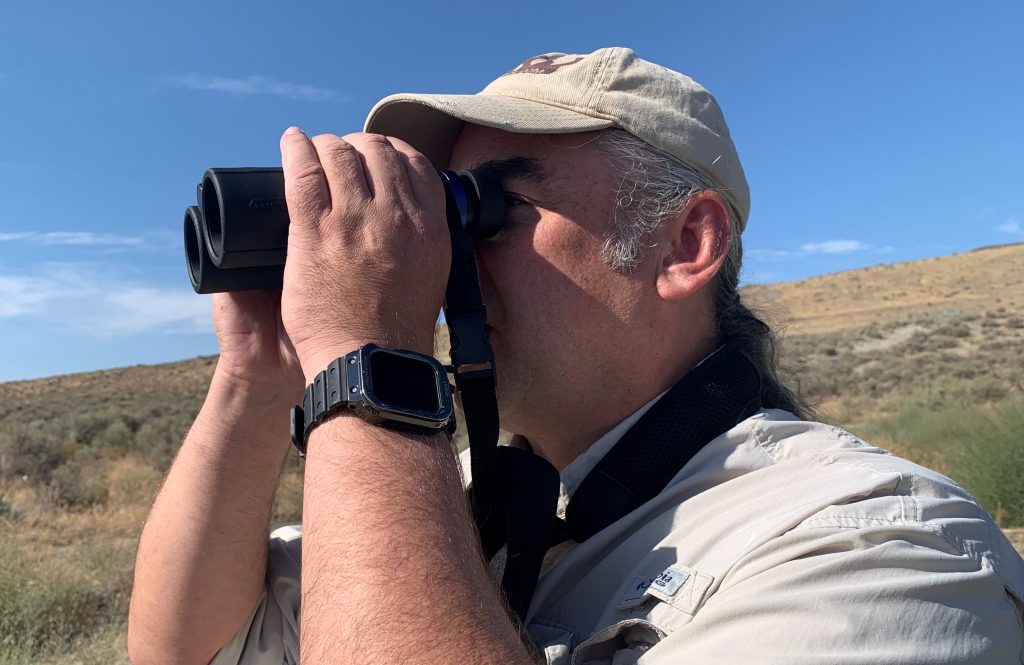 In the future, I hope LUCID offers the B-8s in tactical colors, such as OD, FDE or camouflage patterns.

The LUCID B-8 8×42 binoculars are very impressive and a great value. You would have to pay a lot more than $679 to find binoculars with similar quality and features. If you’re in the market for good quality optics, I strongly recommend you consider them for purchase.

I was hooked the minute I picked them up. While I am certainly not an optical engineer, I’ve used enough optics – good and bad – to know quality binoculars when I use them.

The LUCID B-8 8×42 binoculars are the latest addition to my tactical kit, and I am extremely particular about my gear. I can’t say anything more than that.

As always, thanks for your time. 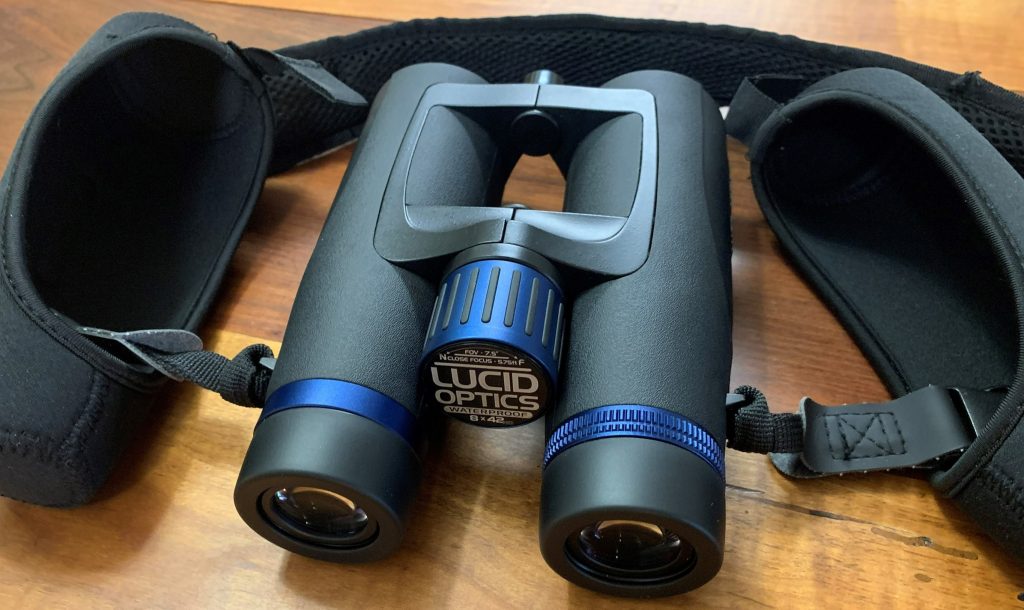