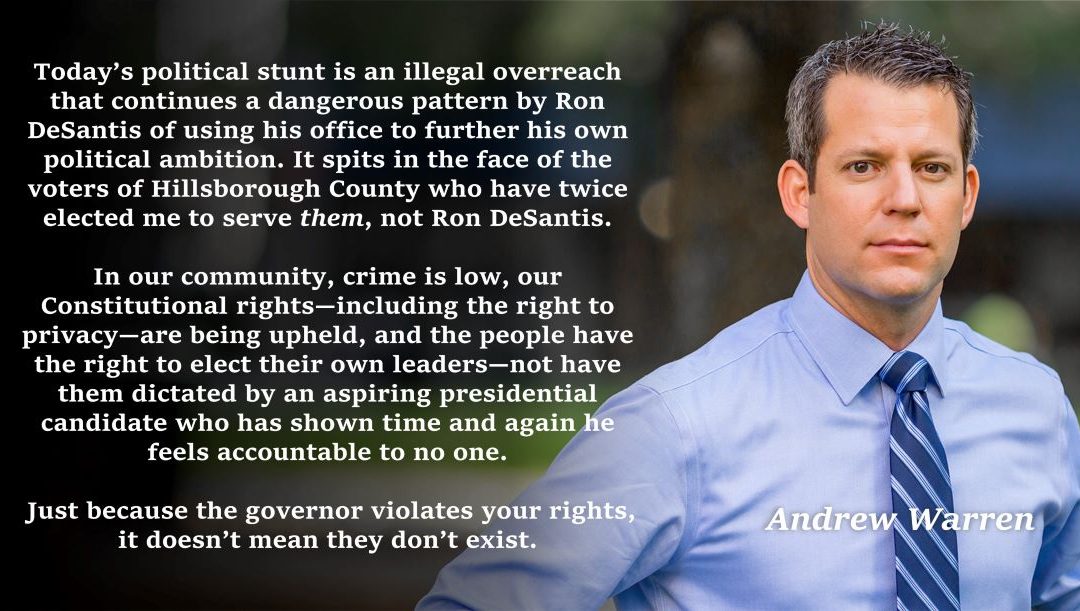 If you looked at State Attorney Andrew Warren’s social media, you might assume he worked for Giffords, Brady or Everytown, not the people of Hillsborough County, Florida.

Warren is an anti-gun zealot.

On Florida’s Stand Your Ground law: “As we said then, this law protects violent criminals & wastes resources by taking officers off the street and making us try cases twice – and has nothing to do with responsible gun ownership. And it’s slowed down the system, delaying justice for victims and their families.”

On Constitutional Carry: “Don’t let them fool you. This is ‘permitless carry’ – zero limits on who can carry concealed – and has nothing to do w/ the Constitution. This makes our neighborhoods less safe, and law enforcement doesn’t want it. You can’t claim to support cops while supporting this. No sane person thinks the 2nd Amendment protects owning a nuclear weapon, which means we recognize the Constitution clearly permits reasonable regulations on right to bear arms. The only issue is whether it’s reasonable to require permits to conceal – and it definitely is.”

On Modern Sporting Rifles: “Another mass shooting using a military-style assault rifle that has no place in our society. Another opportunity for us to do something. Another inevitable disappointment by our elected ‘leaders.’ And another difficult conversation with my children about their safety.”

Things changed yesterday, when Florida Gov. Ron DeSantis issued an order suspending Warren for “incompetence and willful defiance of his duties as a state attorney.”

DeSantis said Warren had put himself “above the law” by choosing which laws he would and wouldn’t prosecute.

Warren had signed public statements promising not to enforce restrictions limiting abortion or transgender treatments. In 2020, he declined to prosecute 67 people who were arrested during violent anti-police protests.

Warren described his suspension as a “political stunt” by DeSantis, and he accused the governor of “using his office to further his own political ambition.”

Warren was escorted from his office Thursday afternoon. He’s already been scrubbed from his official website. Now, it’s up to the state senate to decide whether to make the suspension permanent.

The tone and topics of Warren’s social media posts have also changed. He is no longer fixated on guns, gun rights or gun owners. Now, he’s fixated on blasting DeSantis and getting his job back.

“Just because the governor violates your rights, it doesn’t mean they don’t exist,” Warren tweeted yesterday.