If Gabby Giffords and David Chipman had their druthers, he would be weaponizing the ATF right now before unleashing it upon American gun owners. Instead, Chipman is pleading for $3 donations for Gabby’s cash-strapped gun-control group.

According to a new fundraising email sent Sunday to Giffords’ supporters, it’s now clear the type of ATF director Chipman would have become – the most anti-gun and anti-civil rights in the history of the ATF.

In the email, Chipman spells out why he joined Gabby’s group, but he does not address some of the serious issues that were raised during his aborted nomination process, such the racist comments he made about African-American ATF agents.

“Following my retirement from the Bureau of Alcohol, Tobacco, Firearms, and Explosives (ATF) after 25 years, I was awed by the courage of Gabby Giffords,” Chipman wrote. “I was captured by Gabby’s activism after surviving an assassination attempt and returning to work tirelessly as a force for change.”

Chipman blames the gun lobby for his failed nomination, which he accuses of fueling a “cycle of violence.”

“I was nominated to become ATF director but unfortunately the White House had to withdraw my nomination after an unfounded and false disinformation campaign by the pro-gun National Shooting Sports Foundation,” Chipman wrote. “It is clear that the NRA, NSSF, and the rest of the gun lobby will stop at nothing to fuel the cycle of violence where gun manufacturers – absent fear of liability – profit as public safety erodes. More criminals causing more Americans to buy guns in fear of armed criminals is a corrupt business model.”

Chipman promises he will continue working at Giffords – as if the toxic little man had any other job offers – and he added a dash of derring-do to the years he spent at ATF as nothing but a pencil-pushing mid-level bureaucrat.

“You might ask, why do I continue to do this work? You see, courage is contagious at Giffords in the same way it was when I was a young man arresting gun traffickers and hunting domestic terrorists. If Gabby can continue the fight, I too can get to work — especially when the work is risky, the outcomes are uncertain, but our nation’s future is absolutely in the balance,” Chipman wrote. “The gun lobby and the members of Congress they control want to stop the progress we’ve made before it gets any further. With your help, they won’t succeed. We are going to make sure the NSSF, the NRA, and the rest of the gun lobby don’t get in our way of saving lives.”

Chipman – without a shred of self-awareness – then asks for cash.

“I am disappointed I will not have the opportunity to lead ATF, but I refuse to be defeated. The stakes are simply too high and there is no other line of defense. That is why I am doing everything I can to help Giffords, and why I have to ask: Will you make a $3 contribution before the upcoming September 30th fundraising deadline? Your donation will help us show the gun lobby that we are fighting back.”

Chipman is clearly delusional, a fact which became extremely apparent during his nominating process. He is totally unaware of the one person who is actually responsible for his failed nomination: David Chipman.

Anyone who watched his testimony before the Senate Judiciary Committee knew after just a few minutes his nomination was doomed. Chipman sunk himself. He was biased, evasive and argumentative – an anti-gun zealot in a cheap suit. Add his racist comments to that hellbroth and his nomination became yet another unforced error by the Biden-Harris administration, which cannot stop taking direction from the anti-gun industry even though it embarrasses them on a national level.

By blaming the gun lobby for their resounding defeat, neither Chipman nor his boss Gabby seem to grasp what really happened. The gun lobby – whatever that is – didn’t kill Chipman’s nomination. Millions of Americans who called their Senators and told them to reject Joe Biden’s nominee did.

After they were forced to admit defeat, the White House said they would find Chipman a job that did not require Senate confirmation. It was speculated Biden would appoint him as his new anti-gun czar, but given Kamala Harris’ poor performance as border czar, perhaps Joe’s fondness for czars is waning.

Whether he’s shilling for Gabby or whether he gets a desk in a White House broom closet, I predict we haven’t heard the last of David Chipman. His kind tend to flare up regularly like a social disease in need of a cure. In Chipman’s case, the vaccine was administered by millions of law-abiding American gun owners who took the time to contact their lawmakers – an action we will gladly repeat should another Chipman flare up ever reoccur.

I hope Gabby continues to use Chipman as a fundraising tool. He encapsulates the anti-gun movement: a racist, delusional dullard with no sense of self-awareness, who mistakenly believes he knows what’s best for the rest of the country. 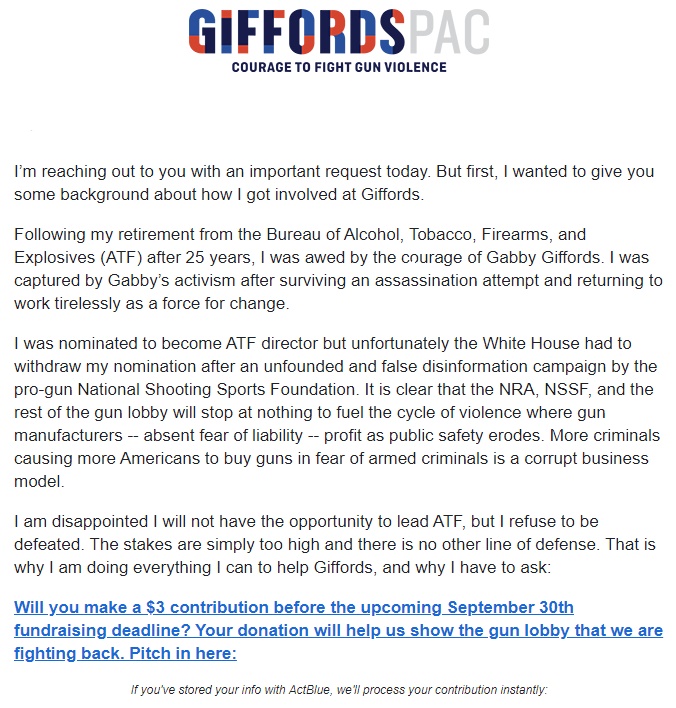 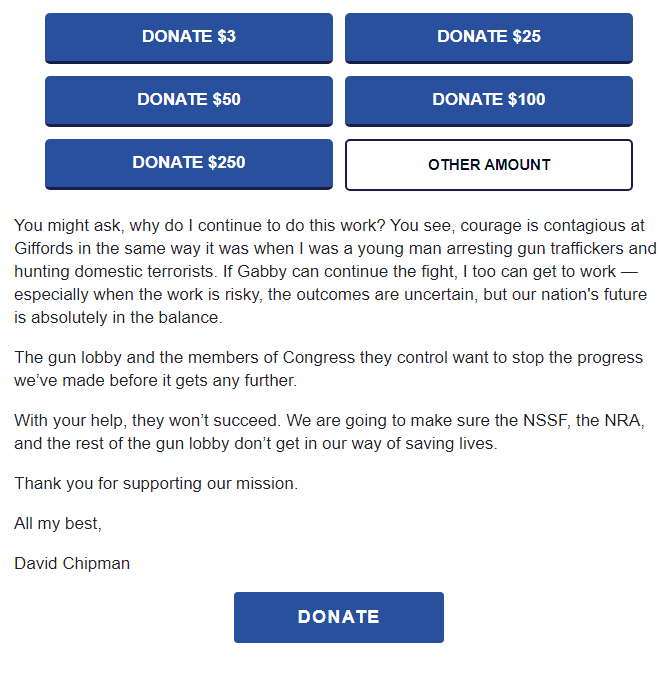