Rare Breed Trigger is a Machinegun According to ATF 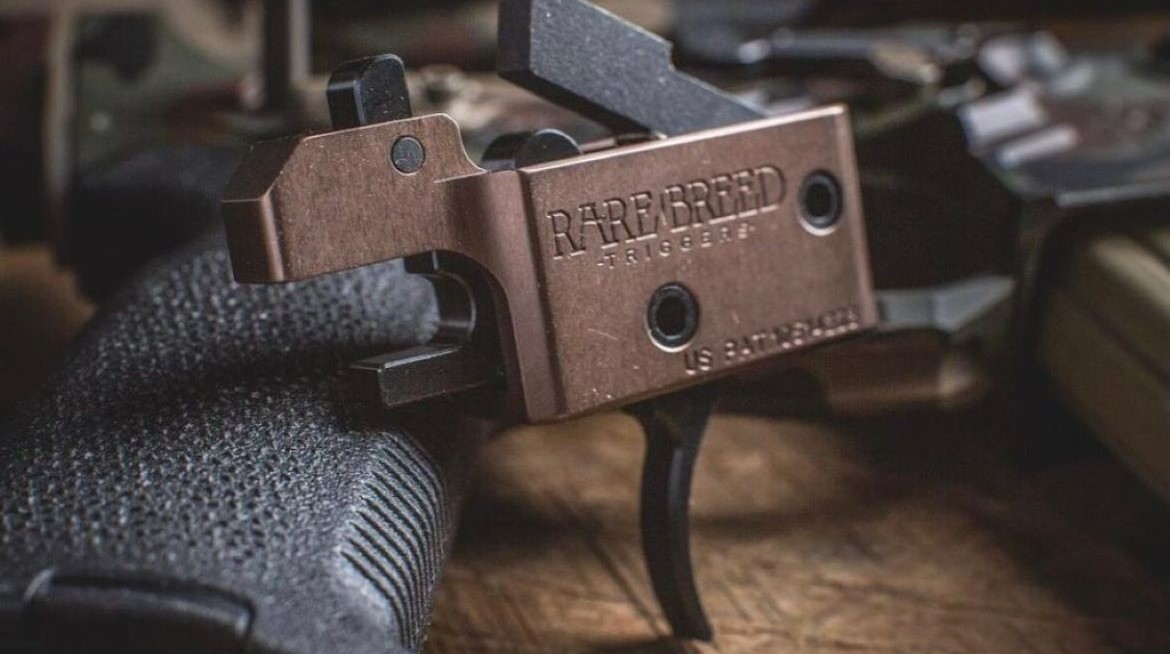 Rare Breed Triggers, by Kevin Maxwell, live up to their name and are indeed a “rare breed” in ingenuity, design and quality.

There is another force in the Rare Breed camp that is making waves.

Enter Rare Breed owner and attorney Kevin Maxwell. He is convinced he can go head-to-head with ATF in court and win his case.

More of that in a moment. 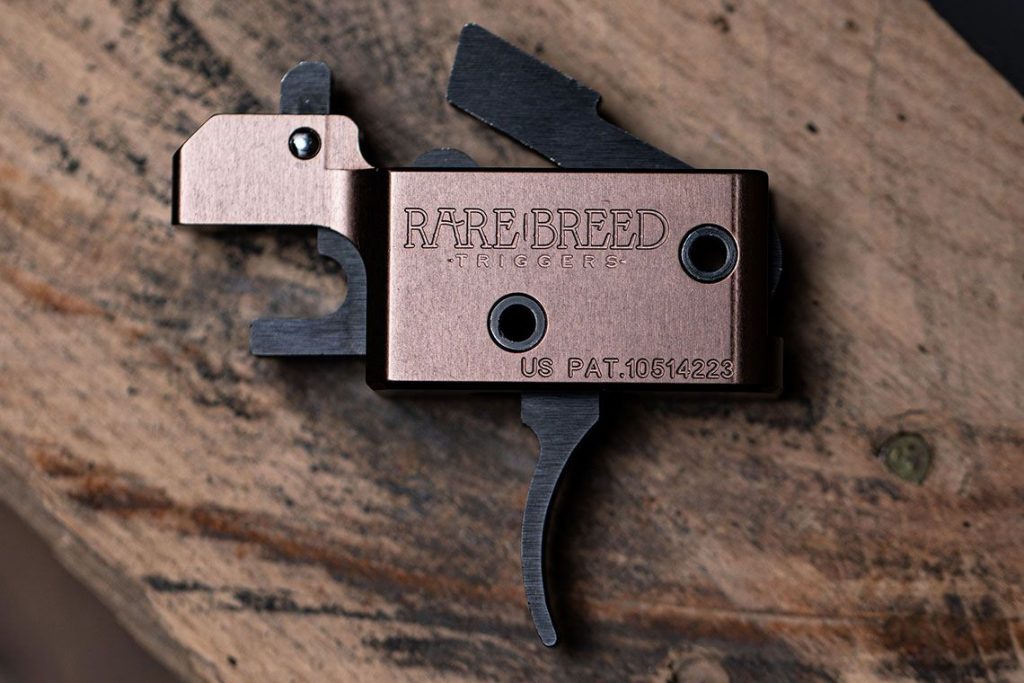 According to the Bismarck Tribune:

Maxwell in an interview with the Tribune said he believes the ATF‘s examination of the trigger occurred after “one of their internet gnomes saw it on YouTube.” He disagrees with the bureau’s classification.

“I know that’s not true because I know how the trigger works,” he said.

Maxwell claims the trigger resets — readies for another shot — faster than any trigger in the world. A semi-automatic AR-15 rifle equipped with one could easily fire at a rate of 500 rounds a minute, but rate of fire is not a criteria for determining if a weapon is a machine gun, Maxwell said.

The ATF definition of a machine gun states, in part, that it is any weapon that shoots “automatically more than one shot, without manual reloading, by a single function of the trigger.”

The FRT-15 requires the shooter to pull the trigger a second time to fire another round. A gun equipped with an FRT-15 would malfunction if the shooter forced the trigger to stay in the fire position, Maxwell said.

Maxwell in his complaint says ATF agents in emails exchanged among themselves before their test stated that the FRT-15 was expected to be classified as a machine gun.

“They made their mind up it’s a machine gun before they even got it to examine,” Maxwell said.

Maxwell filed court documents back in August 2021 stating the Bureau of Alcohol, Tobacco, Firearms, & Explosives made a mistake in its decision based on the definition of what constitutes a machine gun.

In his complaint, Maxwell acknowledges that the ATF has the authority to enforce federal code, in this case the National Firearms Act, known as the NFA.

However, Maxwell states, the ATF “has no authority to change the Code or the Code’s definition of what constitutes a ‘machinegun.'”

Four experts, all former ATF, concluded that Kevin Maxwell’s trigger system, the FRT-15, does not meet the definition of a machinegun.

Long before Rare Breed ever marketed their trigger, they sent prototypes to two experts. Both were former senior ATF staffers.

Kevin P. McCann, an attorney who served as an ATF Resident Agent in Charge for 25 years, examined the trigger system.

According to Maxwell’s complaint, “McCann concluded that the FRT-15 does not meet the definition of a ‘machinegun’ under federal law.”

They sent a prototype to the International Firearms Specialist Academy in Dallas, Texas.

IFSA director Daniel O’Kell, a former ATF Senior Special Agent and the Chief Firearms Technology Instructor at the ATF National Academy, also found that the trigger was not a machinegun.

In Feb. 2021, Rare Breed received a letter from a third expert, Rick Vasquez, another former ATF Special Agent and Former Acting Chief of the Firearms Technology Branch.
“Mr. Vasquez also analyzed the functions of the FRT-15 against the definition of a ‘machinegun’ under federal law and concluded that the manufactured version of the FRT-15 does not meet the definition of a ‘machinegun.'” Rare Breed’s complaint states.

In May 2021, Rare Breed received a fourth letter, which states their trigger is not a machinegun. This letter was sent by Brian Luettke, another former ATF Special Agent, who spent 22 years with ATF.

According to Maxwell’s complaint, Luettke was “an instructor at the ATF’s National Academy where he teaches the application of the Gun Control Act and National Firearms Act identifications and classifications.”

Experts: Rare Breen Trigger Is Not A Machinegun

Together, the four experts have more than 100 years of law enforcement experience.

They are well known to senior ATF officials, because ATF has used them in court hundreds of times as subject matter experts.

The four agents have testified in criminal prosecutions on what does and what does not constitute a machinegun.

Despite this overwhelming evidence, when Kevin Maxwell and his attorneys met with ATF officials, they claimed they had not even seen the disputed ATF test that concluded the trigger was a machinegun.

They didn’t even have a copy of the test, they said.

The stakes are high.

ATF has told Rare Breed that if they do not cease and desist, they intend to file criminal charges.

Maxwell will be forced to close his business.

If he does not turn over his client list, ATF can file felony charges against him.

Maxwell, who is also an attorney, could lose his law license and his business.

In his lawsuit, Maxwell is seeking a court order barring ATF from enforcing their cease and desist letter.

He also wants a letter from the court that states his trigger is not a machinegun.

Maxwell is also seeking attorney’s fees, court costs and “Any other relief that this Court in its discretion deems just and proper.”

Related Video: Attorneys for Freedom Law Firm discusses what to do if you own a Rare Breed FRT-15 trigger.

These particular FRTs are being marketed as replacement triggers for AR-type firearms. Unlike traditional triggers and binary triggers (sometimes referred to generally as “FRTs”), the subject FRTs do not require shooters to pull and then subsequently release the trigger to fire a second shot. Instead, these FRTs utilize the firing cycle to eliminate the need for the shooter to release the trigger before a second shot is fired. By contrast, some after-market triggers have similar components but also incorporate a disconnector or similar feature to ensure that the trigger must be released before a second shot may be fired and may not be machineguns.

Any weapon which shoots, is designed to shoot, or can be readily restored to shoot, automatically more than one shot, without manual reloading, by a single function of the trigger. The term shall also include the frame or receiver of any such weapon, any part designed and intended solely and exclusively, or combination of parts designed and intended, for use in converting a weapon into a machinegun, and any combination of parts from which a machinegun can be assembled if such parts are in the possession or under the control of a person. (Emphasis added.)

ATF’s examination found that some FRT devices allow a firearm to automatically expel more than one shot with a single, continuous pull of the trigger. For this reason, ATF has concluded that FRTs that function in this way are a combination of parts designed and intended for use in converting a weapon into a machinegun, and hence, ATF has classified these devices as a “machinegun” as defined by the NFA and GCA.

Accordingly, ATF’s position is that any FRT that allows a firearm to automatically expel more than one shot with a single, continuous pull of the trigger is a “machinegun”, and is accordingly subject to the GCA prohibitions regarding the possession, transfer, and transport of machineguns under 18 U.S.C. §§ 922(o) and 922(a)(4). They are also subject to registration, transfer, taxation, and possession restrictions under the NFA. See 26 U.S.C. §§ 5841, 5861; 27 CFR 479.101.

Based on ATF’s determination that the FRTs that function as described above are “machineguns” under the NFA and GCA, ATF intends to take appropriate remedial action with respect to sellers and possessors of these devices. Current possessors of these devices are encouraged to contact ATF for further guidance on how they may divest possession. If you are uncertain whether the device you possess is a machinegun as defined by the GCA and NFA, please contact your local ATF Field Office. You may consult the local ATF Office’s webpage for office contact information.