Shooting while moving is a tactical fundamental

The best way to win a gunfight is by quick, violent and aggressive action.

This applies to all threats you may encounter. Bad guys never expect their victims to fight back quickly and violently. They’re used to sheeple.

For example, when The Bad Man and his crew boot a front door, they expect their victims to cower in fear or hide under their beds. What they don’t expect is an armed homeowner heading straight at them while simultaneously delivering deadly accurate fire – round after deadly round.

You can see this in countless crime videos: When a victim immediately shoots back, the bad guys run wildly in tight circles – as if this magically wards off bullets – while shrieking and firing unaimed rounds over their shoulders.

The ability to shoot while moving allows you to join the fight immediately without becoming a stationary target – while moving to cover, disengaging or heading directly at your assailant – whatever the tactical situation requires.

It is key to winning a gunfight, and one of the building blocks of more advanced tactics like CQB. Unfortunately, for civilian gun owners, it is often one of the least-trained tactical fundamentals. There are several reasons for this. Most gun owners have to use a public range. Most public ranges won’t allow you to draw from a holster, much less shoot while moving. Furthermore, there aren’t a lot of instructors teaching the skills. Therefore, if you find an instructor who knows what they’re doing and a range that allows it, you’re truly fortunate, because it is an extremely valuable but extremely perishable skill.

Here are some tips I’ve learned over the years:

Practice at home too. Right now, I devote the majority of my at-home dry firing to shooting while moving. I use a LaserLyte trainer. Like all electronic shooting simulators, it has its drawbacks, but for shooting on the move it works for me. There are other products that will work just as well. 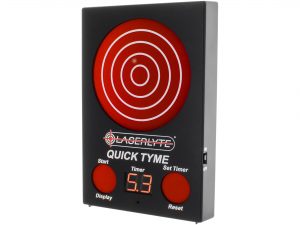 Avoid silly walks. Some trainers advocate overly exaggerated heel-to-toe walking or other funny struts. There is actually a Russian technique that stresses clenching your butt cheeks together to keep your upper body more stable. (I actually tried it once but nearly fell over because I was laughing so hard.) My advice is to walk as normally as possible, while still trying to absorb shock with your lower body and keep as level as you can. Believe me, you will have enough to focus on just watching your sights bobbing up and down, so you don’t need to devote any extra brainpower to silly walks.

Focus on the sights. Here’s where all your practice in rapidly acquiring sight alignment and/or sight picture come into play. When your sights are on target, which will only happen briefly when you’re moving, take the shot. This is the most difficult part of the entire tactic, especially when you’re starting out, but it does get easier with practice. Don’t get frustrated.

Don’t stop and shoot. Shooting while moving is not moving, stopping, acquiring a proper stance and then shooting. That’s competition shooting, not real-world gunfighting. Nor is it jumping off the “X” and then shooting. That’s silly range theatrics. When you start out, you’re going to want to stop or slow down before you pull the trigger. That’s normal. It’s an instinct that will dissipate with practice.

Don’t go too fast. Focus on being smooth. Speed will come with practice, as will better hits.

Realize you will trip and fall. I’ve fallen three times in training: once with a handgun and twice with an AR. It happens, even to those not a clumsy as me. None resulted in a negligent discharge. If you maintain good trigger discipline, you won’t have any problems.

To sum, shooting while moving is a mindset, of sorts. It typifies the ultimate in controlled, violent aggression. To me, it means that I will run right at my assailant – right through them, actually. One veteran CQB expert, a friend who should know, described the tactic as a lifestyle. It can be a bit of a humbling experience when you’re first starting out, but it is extremely addictive when you start making your hits. The key is finding the right trainer.

As always, thanks for your time.