by Kevin Sona and Lee Williams

When the Miami Police Department’s “GUNS 4 UKRAINE” gun buyback first began Saturday morning, police allowed the public and members of the pro-gun media to stand next to three tents where the transactions were taking place.

However, when it became obvious that turnout was poor and the event was fizzling, police started pushing onlookers back farther and farther away – a total of eight times. Eventually, the public was moved more than 150 yards away from the tents.

In addition, Miami Police positioned vehicles and bicycle officers to block the public’s view of the buyback. 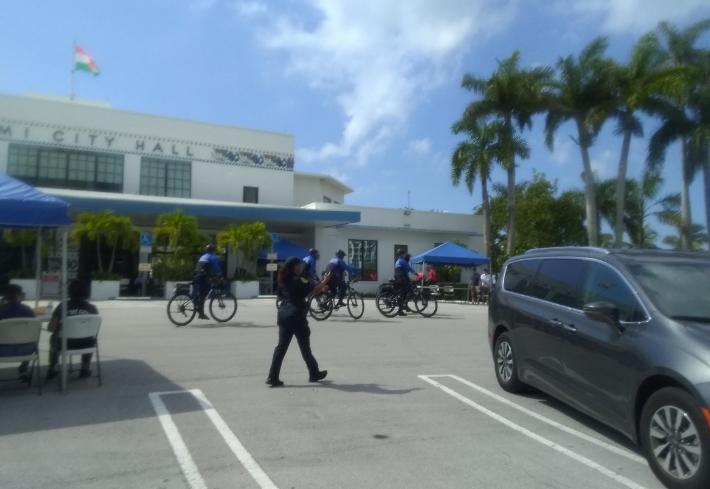 Miami Police used vehicles and bicycle officers to block the public from seeing what type of firearms were turned in Saturday during a gun buyback. (All photos courtesy Kevin Sona.)

“They said they were pushing us back for our safety and for officer safety,” said Kevin Sona, a Florida Carry, Inc. director who covered the event for the Second Amendment Foundation’s Investigative Journalism Project. “The only unsafe act I saw were the cops who were muzzling themselves and other people.”

To be clear, Sona and a few other onlookers were on a public sidewalk near the public parking lot of Miami City Hall. They never strayed onto any private property or into any restricted areas.

“They must have moved us away 8-10 times,” Sona said. “We’d see them with a roll of crime scene tape and we knew we were getting pushed back, again.”

What were Miami Police trying to hide?

“In my opinion, they pushed us back because they didn’t want us to document the failure of this event,” Sona said.

Shipping guns to the Ukraine illegal

A story published Wednesday revealed how the department first created the gun buyback, which they called “GUNS 4 UKRAINE.” Miami Police spokeswoman Officer Kenia Fallat confirmed that the weapons collected at the buyback would be shipped to the Ukraine for use in their ongoing war against the Russian military.

However, shipping firearms to a foreign country without proper export license violates federal law, specifically the International Traffic in Arms Regulations, known as ITAR, and in a written statement provided as a response to this story, Miami officials admitted they do not have any export paperwork.

Shipping guns to the Ukraine also violates Florida Statute 790.08, which regulates what police can do with firearms or other weapons that come under their control.

Basically, they can use the weapons, loan them to another law enforcement agency, destroy them or sell them, but the statute requires them to deposit all money raised from the sale into the state treasury earmarked for the benefit of the State School Fund.

The state statute does not allow them to ship the arms to a foreign military.

Officer Fallat attended the event. She told Sona she believes the department threw her “under the bus” because she wasn’t “fully briefed” about the export restrictions, which she said was a “major disservice.”

Asked Saturday how the public would likely react when they learned the guns would not be shipped to the Ukraine, Officer Fallat said “the city was kind of taking advantage, and they’re not telling the truth.

Sona stayed at City Hall throughout the event. He estimates 10-15 guns total were bought-back by police. Most were old single-shot or bolt-action rifles and shotguns. There were a few homemade firearms. 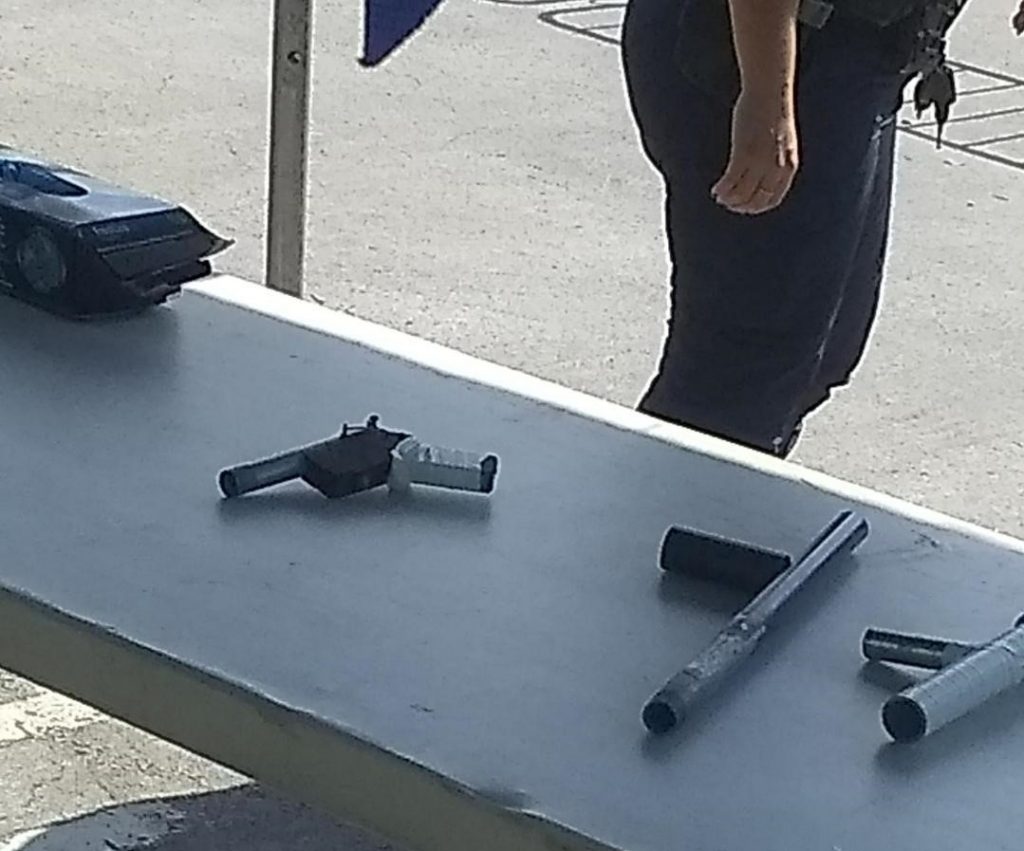 Several homemade weapons were turned in Saturday during a gun buyback held by the Miami Police. (All photos courtesy Kevin Sona.)

To be clear, no ARs or AKs were seen. However, Miami Police would later claim they recovered more than 60 firearms, and they released a photo of an officer with an AK on their social media.

“In my opinion, this was 100-percent staged,” Sona said. “They got about a dozen guns, maybe, and we did not see a single modern sporting rifle – not one AK or AR.”