The International Association of Chiefs of Police (IACP) claims to be the world’s largest and most influential professional association for senior police executives, and like many of its members and major donors, it is devoutly anti-gun.

An investigation by the Second Amendment Foundation’s Investigative Journalism Project revealed that the top IACP donors include billionaire Michael Bloomberg and other staunch anti-gun groups, and based upon an anti-gun propaganda piece the IACP recently published, Bloomberg and his ilk are getting their money’s worth.

Formed in 1893, the IACP claims to have 31,000 members in more than 165 countries. “The IACP is a recognized leader in global policing, committed to advancing safer communities through thoughtful, progressive police leadership,” its website states.

There’s an important distinction to be made between elected county sheriffs and appointed chiefs of police who comprise the IACP. Sheriffs are answerable to the people. If a sheriff makes an unpopular decision, such as promoting an anti-gun agenda, the voters can remove them from office. Chiefs of police, however, are answerable to whoever appointed them to office, usually a city manager who serves at the pleasure of a city council. As a result, police chiefs tend to mirror the politics of their bosses. Large metropolitan cities that historically have been controlled by Democratic administrations appoint fellow Democrats as chiefs of police, and it is these anti-rights chiefs who dominate the IACP committees and senior leadership.

One of the IACP’s latest stories, “Ghost Guns: Profits for Illegal Manufacturers, Concealment for Criminals and Terrorists Worldwide.” which was published in the November issue of IACP’s Police Chief magazine, is clear evidence that the IACP chiefs are nothing but paid propagandists with gold badges in their billfolds.

Homebuilt firearms are perfectly legal, despite the author’s ghost gun label, which is just the latest in a long line of focus-group-honed anti-gun pejoratives, such as Saturday Night Special, Cop Killer bullets and, of course, assault weapons.

The IACP is a nonprofit 501c(3) with assets totaling more than $33 million. According to its most recent IRS Form 990, in 2019 the IACP received more than $16 million in grants and contributions. The document does not specify the exact source of the funds – the actual grantors or contributors. However, all of the IACP’s major donors, which it lists on its website are either solely devoted to banning guns or have large anti-gun programs.

Also listed is the lesser-known Joyce Foundation, which operates its own “gun violence” prevention program. Its goals are to:

The Laura and John Arnold Foundation is another source of grant funding for the police chief group. The two left-wing billionaires have invested more than $20 million in anti-gun research seeking “the causes of and solutions to gun violence in America.”

Other IACP donors include the U.S. Departments of Justice, State and Transportation, in addition to the Target Corporation and NBA legend Michael Jordan.

That all of its major donors are anti-gun could not be a coincidence, but is instead a pattern and practice of behavior, which are strong words in law enforcement circles.

In 2018, IACP members passed a resolution “warning of the threat posed by untraceable firearms made through 3D printing and unfinished frames and receivers.”

The resolution states: “The availability of online code for the 3D printing of firearms and firearm parts increases the risk that dangerous people, including felons, domestic abusers, and other people prohibited from possessing firearms under federal law, as well as terrorists and criminals around the world, will evade background check requirements and obtain a firearm.”

The “ghost gun” story that appeared in Police Chief this month was written in support of this resolution and in support of a rule change proposed by the ATF, which would require manufacturers of firearms parts kits to be federally licensed, pay Federal Firearms Excise Tax, require ATF Form 4473s from customers, conduct NICS background checks and follow ATF recordkeeping requirements.

To be clear, the story was not designed to inform or educate IACP members. It was written to support the ATF’s and the IACP’s latest anti-gun effort – their senseless war against homebuilt firearms.

Not surprisingly, both of the authors who wrote the ghost gun story are retired ATF agents.

The story makes some bold claims, which are anecdotal and not supported by any data:

Emails sent to the IACP’s media contact were not returned. The emails contained one question: Does your data differentiate between homebuilt firearms that were legally made without a serial number and commercially-made firearms that had their serial numbers illegally altered or removed?

An IACP staffer who answered the phone said the group “was currently between media people.” She promised that Sarah Guy, a senior adviser to the IACP, would speak on behalf of the organization and answer questions for this story. Ms. Guy never returned calls.

The ghost gun story was written by Joseph Vince and Hugo Barrera – both retired ATF agents.

Vince describes himself as a professor at Mount Saint Mary’s University in Maryland. (The college’s website says he is a lecturer.) According to his bio, Vince spent 30 years as an ATF agent before joining the college as Director of Criminal Justice Programs.

“Due to Vince’s vast experience involving the diversion of firearms for illegal purposes, he was appointed the United States’ representative to the United Nations Working Group on Small Arms Proliferation,” his bio states. “This group was tasked with devising a comprehensive plan to enable nations to work together in thwarting the flow of small arms to criminals and terrorists.”

Barrera, according to his bio, joined the ATF in 1983. His career included an appointment to the ATF’s Office of Professional Responsibility (Internal Affairs), and a stint as the Special Agent in Charge of the ATF’s Miami Field Division. Barrera currently heads the South Florida High Intensity Drug Trafficking Area (HIDTA).

Neither Vince nor Barrera returned calls seeking comment about their story. 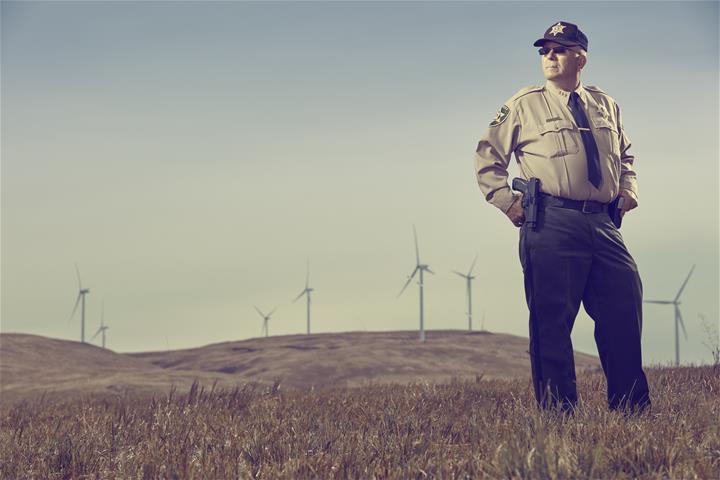 Bob Songer is the Sheriff of Klickitat County, Washington.

“Not allowing citizens to attend church or firearm dealers to conduct business is a violation of the First Amendment and the Second Amendment, but the Governor has no problem allowing marijuana shops to stay open for business,” Sheriff Songer posted on his department’s website. “As Sheriff I will uphold our citizens’ constitutional rights and liberties and will NOT ENFORCE Governor Inslee’s COVID-19 Proclamation Orders on public gatherings and non-essential businesses.”

Asked Monday whether “ghost guns” were showing up at crime scenes in Klickitat County, Sheriff Songer said, “No. Hell, no. Ghost guns are just BS spread out there like assault weapons to get naïve people not familiar with firearms running scared like a bunch of sheep. I’ve heard of ghost guns, but I haven’t seen a single one.” 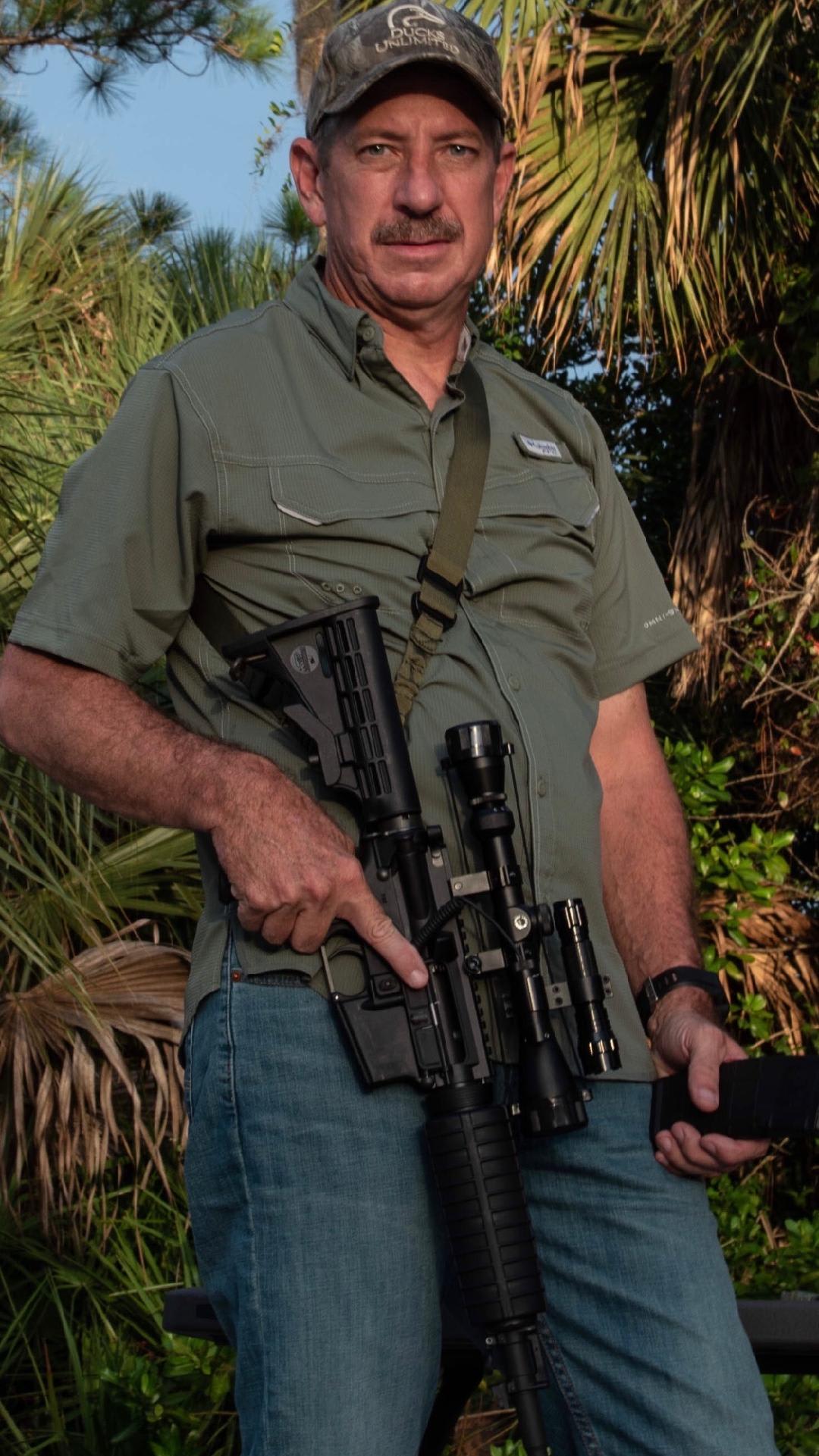 Kurt Hoffman is the Sheriff of Sarasota County, Florida.

Sheriff Hoffman, too, has not seen any homebuilt firearms show up in crime scenes.

“I haven’t seen one single one,” he said. “The term ‘ghost gun’ is rhetoric created by anti-gun people. It’s a buzzword that could eventually become reality the more it’s used, like ‘assault weapons.’ The more that ‘ghost guns’ get into our lexicon, the more it becomes a false narrative, from this sheriff’s position.”

Said Hoffman: “As Sheriff of one of the largest Sheriff’s Offices in Florida, I am not involved in any IACP training or activities because of this very reason: It is intellectually dishonest to write that kind of an article.”