I’ve been a fan of Surefire products for a long time – decades, in fact. And as an ex-cop, I’m still somewhat addicted to high-quality white lights – too many midnight shifts will do that to you. So, when I saw that Surefire had a 300-lumen flashlight, called the Sidekick, which was about as big as a Zippo lighter, I had to have one.

To be clear, this was a personal purchase. Surefire did not comp me a free flashlight for this review. I bought one.

The first thing you’ll notice about the Sidekick is the size – it’s small, very small. It’s a tad bigger than the aforementioned Zippo, but it’s even lighter, a mere 1.2 oz. The next thing you’ll notice is the output – 300 lumens is powerful. It’s more than enough for most situations, and it’s far brighter than any iPhone light or most other keychain flashlights.

“The Surefire Sidekick is rugged, powerful, made in America and has an incredibly low MSRP of $29.99.” 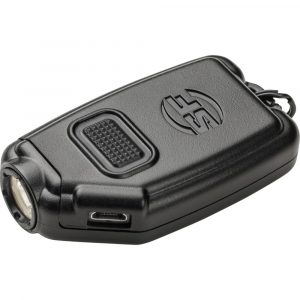 If you’re like me, you’re already spending far too much money on batteries, so that was another consideration about the Sidekick purchase. It comes with a micro-USB cable, which charges its internal lithium/ion batteries. Mine is charging off of my computer right now.

As you would expect from Surefire, the light is rugged. It’s constructed out of polymer, but it has an aluminum core.

The only thing I do not like about the Sidekick is that the switch has no momentary-on feature like most of their tactical weapon lights. You can’t press the switch halfway and then let off for a quick burst of light. If you press the switch, the light will activate and remain on. It’s not a major issue, because if I’m ever forced to use my Sidekick for CQB, things have gone terribly wrong in my life.

I’ve saved the best for last. According to the Surefire website, the sidekick has an MSRP of $29.99, but be careful, a lot of websites are charging more – considerably more.