The Gamut Challenge: A two-day, 25-mile shooting competition designed by a Tier 1 veteran

Over the course of two days, 35 shooters ran and rucked more than 25 miles, while carrying 35-pound packs, carbines, handguns and hundreds of rounds of ammunition. They navigated through a series of obstacles, performed one-man CQB, and engaged multiple targets from 16 different shooting positions, including shooting from moving vehicles.

The event was called the Gamut Challenge. It was created by Bob Keller, owner of Range Werx, a new state-of-the-art range complex located in Polk County, Florida.

For those who don’t know him, Bob spent his entire military career in Army Special Operations, first in a Ranger Battalion, then Special Forces and finally in the Army’s most elite Special Missions Unit, where he rose to team leader and acting troop sergeant-major. Nowadays, through his shooting and tactical training firm Gamut Resolutions, Bob teaches civilians, police officers and SWAT teams the skills that kept him alive during hundreds of gunfights. 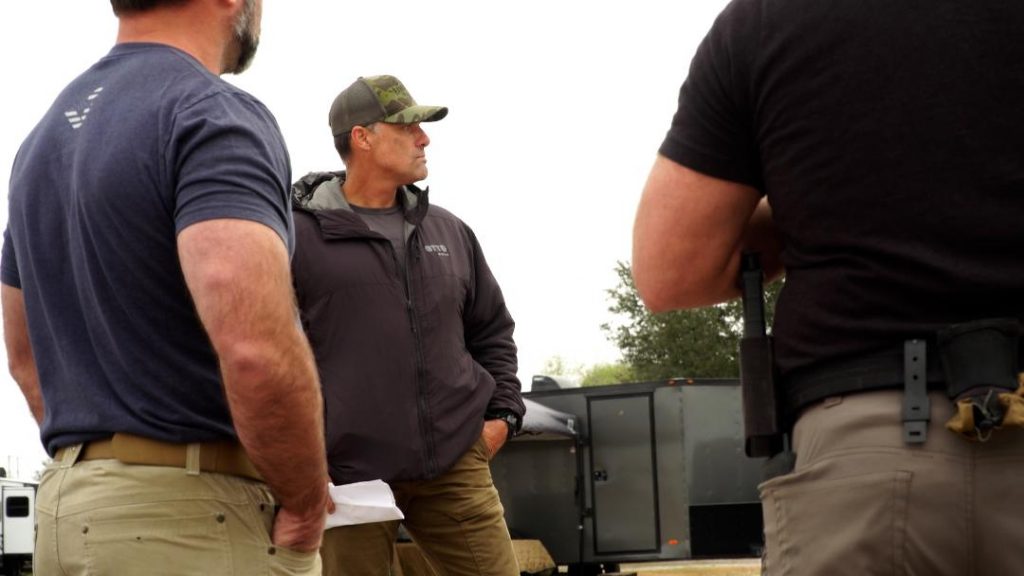 This weekend, the 35 shooters each paid $275 for the Gamut Challenge, but because the slots sold out so quickly another event has been scheduled for November.

“It’s basically two days of running, rucking and shooting,” Bob said. “All for a chance to get smoked, get a t-shirt and a barbecue dinner.”

There was only one prize awarded – the event can have only one winner, he says – a “Bob Keller Signature Rifle,” made exclusively by Special Ops Tactical in Apopka, Florida. The winner also received $1,000 to outfit the rifle from Arthur Viani, owner of Ghost, Inc., maker of self-defense triggers, connectors and other accessories for Glock pistols.

Safety was paramount. Each morning Bob led the shooters through a 30-minute safety brief, range procedures and medical plan, the likes of which are usually never seen at most flat ranges.

Since plates were not required, most of the participants wore chest rigs and battle belts. All had ARs. Most carried Glocks. About half the pistols had optics. There were rucks of all types, from civilian Gucci-types to milsurp ALICE packs. 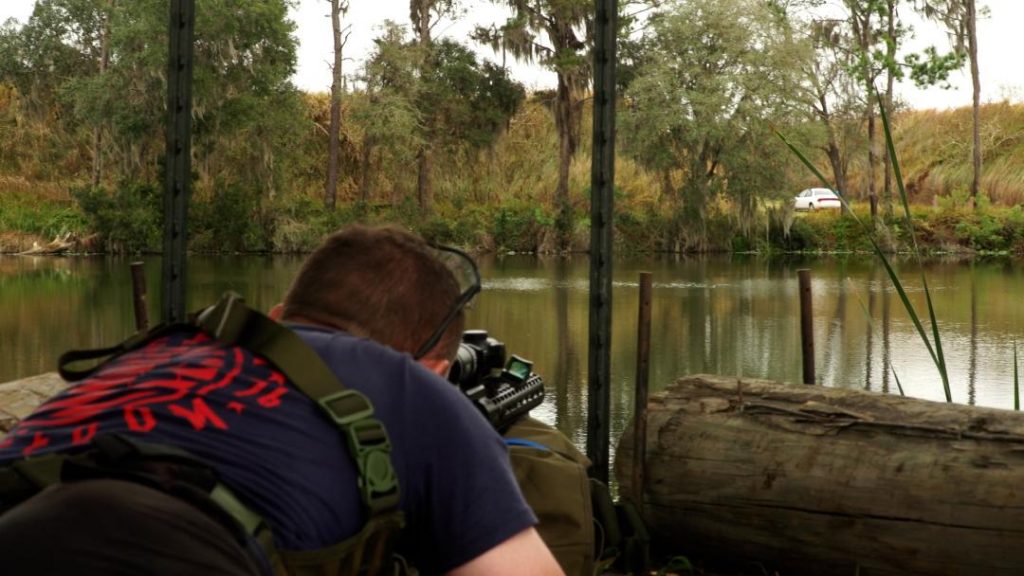 A full description of the course – exact distances and times – is proprietary. Suffice it to say, it’s not easy and there were surprises, such as finishing a long ruck march and being told to add a 20-pound sandbag to your pack and to keep going.

Overall, the two-day challenge is a timed event, but misses add time penalties to a shooter’s raw time. At some stages, a miss can add 30 seconds. At others, one miss can add as much as five minutes.

“The whole concept is to have all the skills. You can’t just be a fast runner or rucker. You have to have everything in order to win,” Bob said. “If you can ruck six miles in an hour, but then have 15 misses, you won’t win. You have to have balance, strength, endurance and you’ve got to be accurate and a fast shooter. I put the course together based on what I needed to be a good gunfighter.”

One participant suffered an ankle injury on the first day and was forced to drop out. Everyone else finished the two-day event.

“I was thoroughly impressed with everyone sucking it up,” Bob said. “They were hurting, but no one quit.” 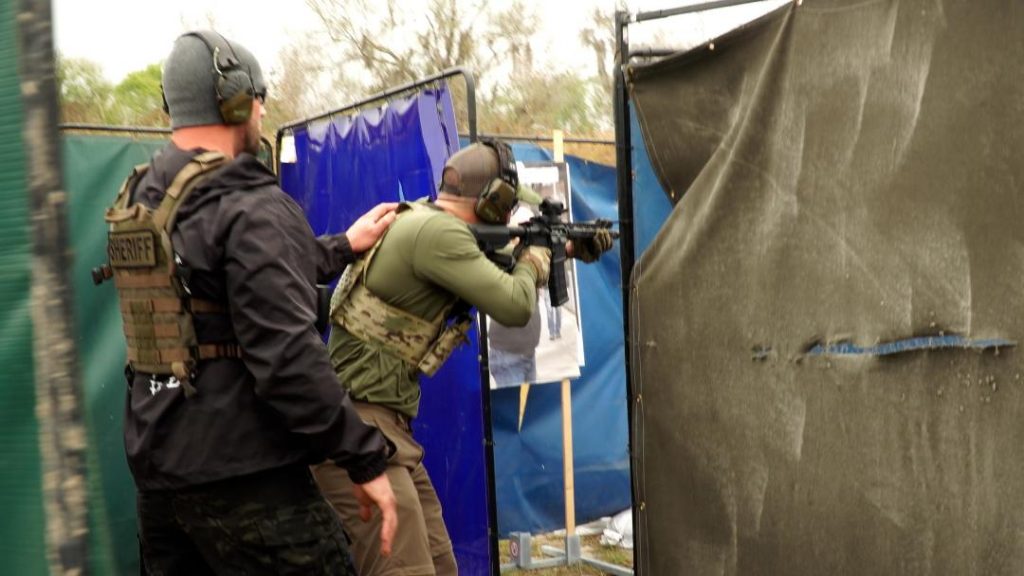 The 35 shooters were of all ages and experience. Some were law enforcement, but most were civilian shooters. Most had taken some of Bob’s classes. Those who hadn’t vowed they would.

All of them recommended the challenge.

Ryan from Charlottesville, North Carolina said, “I love pushing myself to the limit. I love doing it, but I just hate it while I’m doing it.”

Mike, a police lieutenant from New Jersey, has taken Bob’s introductory and advanced classes. He ran the course with a Colt Patrol Rifle and Glock 22.

“It’s like a kick in the nuts. It hurts, but I cleaned the dots,” he said.

Jason from Gainesville, used an HK VP9 and a Daniel Defense carbine.

“I wanted to push myself. It’s important the physical aspect of shooting. It was extremely well run, especially for the inaugural year. The most difficult aspects were the rucking, and we got deep into rucking, and the unknown distances and unknown standards. We got done and were told to add a 20-pound sandbag to our packs. You never knew if you were done or not. Shooting from a moving car was awesome! At 10 mph, you had to put three rounds into three IPSC targets – 10 mph sounds slow, but it’s not. I did things today that I never did in eight years in the Marine Corps, and Bob kept it fun.”

Levi works for the Department of Energy security in Lake Charles, Louisiana.

“I was a two-sport college athlete, but I never got worked like this,” he said.

Willis is firearms trainer and an IT specialist in Tampa.

“This is a true test of physical ability and shooting, but compared to other competitions out there, this one was all about shooting and mental tenacity. The others are about physical prowess, but here, shooting is the biggest deciding factor. You can be a great athlete, but if you can’t shoot, you’re not going to do well.

Kaila is a game warden from Lakeland, Florida and was the only female competitor. Range Werx is her home range, where she trains as often as she can. She ran the course with her department-issue Glock 17 and a “Frankenstein” rifle.

“This is the most challenging thing I’ve ever done,” she said. “I liked it and absolutely recommend it. I do cross fit, but there I know when I’m done. Here, you never do.” 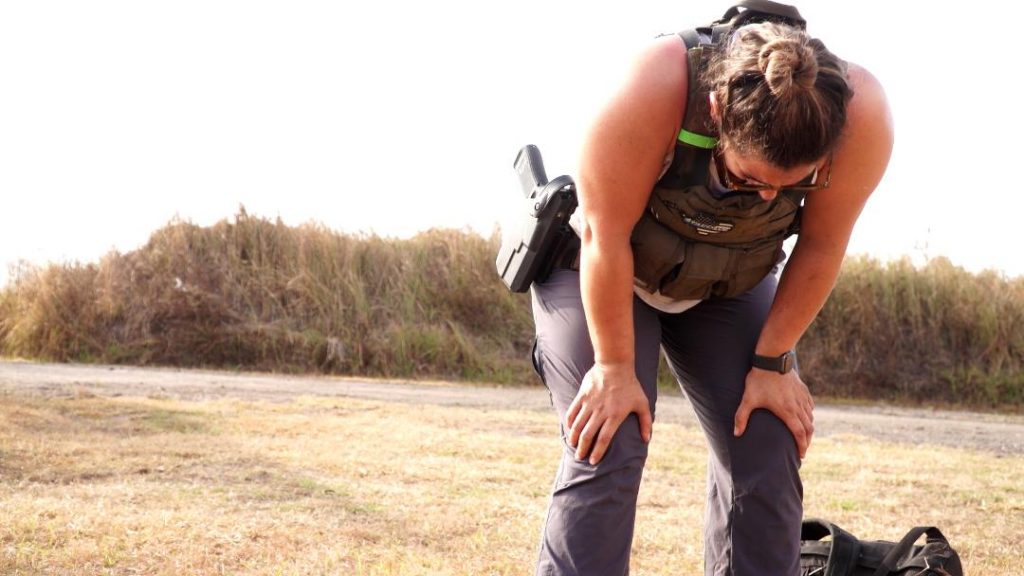