Skip to content
Home » The power of grassroots on display

The power of grassroots on display

I’ve always been a huge advocate of grassroots gun rights organizations. They’re real. They’re made up of people who actually care and that’s what makes them so wildly successful. Over the past three weeks, I’ve had an opportunity to participate in two grassroots events in Phoenix, AZ, and Atlanta, Ga.

In Phoenix two weeks ago, I was one of a wide variety of speakers at an event held at the Arizona State Capitol, and yesterday I was honored to emcee the GA2A (formerly known as Georgia Carry.org) event at the GA State Capitol. As state legislative sessions ramp up across the nation at this time of year, these types of planned events coincide with grassroots lobbying efforts in support of pro-gun legislation. 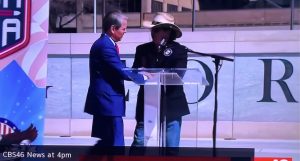 If you’ve never attended one of these events, I would highly recommend you do so. You’ll meet fantastic, like minded, folks who share your passion for the right to bear arms and, more importantly, you’ll feel a tremendous sense of accomplishment. Your mere presence at a pro-rights rally makes a huge difference.

Take the Arizona gathering in Phoenix, for example. It was a family affair with food trucks, various tents with clothing, food, household items, firearm accessories, and so much more. Families wandered the grounds and centered on the stage when the speakers were talking, each bringing their unique perspective to what brought them all together in the first place, freedom. It’s a festive atmosphere to say the least.

I’ll compare that to the GA2A event yesterday which was more formal. While the event was lightly attended, (disappointed but we’re working on that), it drew local media that gave it a much bigger footprint. That’s great news and a message to the anti-gun establishment that we’re winning, they’re losing and we will never cede an inch to them. Ever.

Please, if you haven’t done it already, join your state’s grassroots group and make a difference. It sends a powerful message to state legislative bodies, regardless of party control and puts the anti-gunners on notice: We’re here and we will never let you win. Freedom will always prevail.

About the Author: Mark Walters

Mark Walters is the host of two national radio broadcasts, Armed American Radio’s Daily Defense and flagship Armed American Radio, he is the co-founder of AAN, author of three books, and member of the board of directors of the Citizens Committee for the Right to Keep and Bear Arms (CCRKBA). Mark is the CEO of parent company CCW Broadcast Media, LLC