The Rise Of An American Secret Police Force

Law enforcement is a state right. Our founders knew that concentrating too much power in any one federal agency – especially a law enforcement agency – could lead to a tyrannical secret police state. It was one of their greatest fears. After all, they knew a thing or two about tyranny, and it was something they wanted to avoid at all costs.

As a result, today’s federal law enforcement agencies have very limited authority and very specific missions: Border Patrol patrols the borders, of course; DEA investigates narcotics; and the ATF enforces archaic alcohol, tobacco, firearms and explosives laws. The FBI has by far the broadest powers, but it too is constrained by a very specific set or rules and guidelines from the U.S. Attorney General – a process called predication. Contrary to what’s depicted on television, before FBI special agents can swoop in and take over a case, they must first have a federal predicate – they must believe that a federal crime or national security threat exists before they can investigate.

All of these federal agencies are transparent and accountable to the public, although some more so than others. They’re all subject to the federal Freedom of Information Act (FOIA), which was signed into law in 1966, and they routinely publish annual reports as well as internal investigations by their inspectors general.

All federal law enforcement agencies keep the public informed of their activities – all except one.

If you want to create a secret police force, the U.S. Capitol Police would be a good choice, since they’re already halfway there. The agency has scant oversight. It’s shrouded in secrecy and refuses to change.

The United States Capitol Police (USCP) is part of the legislative branch, which is exempt from FOIA requirements. Because they report to Congress, the USCP believes they too are exempt from FOIA. I should point out by way of comparison that even the CIA is subject to FOIA. Additionally, the USCP publishes no annual reports, and even the findings of its own inspector general are kept secret and not made public.

The mission of the USCP is to “Protect the Congress – its members, employees, visitors, and facilities – so it can fulfill its constitutional and legislative responsibilities in a safe, secure and open environment,” so you would think that the agency would focus its enforcement efforts in Washington, D.C., but that is no longer the case.

Congress is now seeking to nationalize the USCP by creating “field offices” in different states. Two field offices are planned for now, but more are coming.

“The new USCP field offices will be in the Tampa and San Francisco areas. At this time, Florida and California are where the majority of our potential threats are,” the agency announced in an email last week.

These new field offices will be used to “investigate threats” made against members of Congress, Acting USCP Chief Yogananda Pittman announced last week.

Clearly, Pittman and the agency she heads are reeling from the events of Jan. 6. In her press release titled: “After the Attack: The Future of the U.S. Capitol Police,” Pittman spells out some of the changes that have already taken place. While the chief announced the acquisition of two new “wellness support dogs” – Lila and Filip – a “pivot towards an intelligence-based protective agency,” the purchase of new riot helmets, shields and less-than-lethal munitions, she did not identify the types of threats her officers will investigate in their newly created regional offices.

The one thing that is clear, given the USCP’s penchant for secrecy, the public will never know what they’re up to.

“If you want to create a secret police force, the U.S. Capitol Police would be a good choice, since they’re already halfway there. The agency has scant oversight. It’s shrouded in secrecy and refuses to change.” 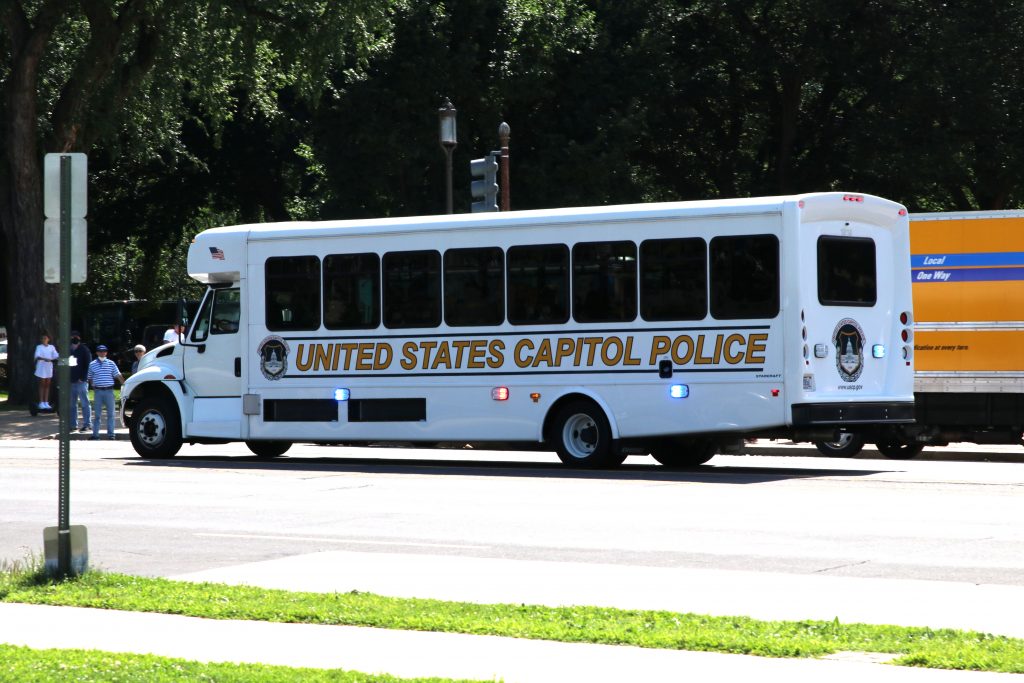 Since it was founded in 1828, seven USCP officers have died in the line of duty. Today, the USCP has more than 2,300 officers and civilian employees, and an annual budget of more than $460 million.

To say that the agency has a muddled chain of command would be an understatement.

All of these committees are currently chaired by Democrats.

Chief Pittman reports directly to the Capitol Police Board, which is subordinate to the four congressional committees. None of these boards or committees are subject to federal FOIA requirements, or are otherwise accountable to the public.

Demand Progress is a left-of-center internet-activist nonprofit 501(c)4, which advocates for online freedom, civil liberties and transparency in government, among other things.

In June of last year, the group sent a letter to the chairs and ranking members of USCP’s congressional oversight committees, calling for greater transparency and accountability within the agency.

It noted the cozy and “often personal” relationship that exits between the USCP and their congressional protectees. “This is a relationship that arises from privilege, and we would hope that all interactions with the USCP would go as smoothly as those they have with elected officials and senior staff.”

The letter also pointed out that the USCP, “provides little public information about its activities; is under no statutory obligation (such as a Freedom of Information law) to answer record requests from the public; does not publish an annual report on its activities; does not publish reports from its oversight body, the Capitol Police Board, nor the USCP Inspector General; does not proactively publish its annual statistical summary of complaints drawn from Office of Professional Responsibility records; and only began in December 2018 publishing sparse information concerning its weekly arrests. The agency issued only 15 press releases in 2019; has never used its Twitter account; and, while we have been able to determine there is a daily Department News Summary, that document has not been made available despite our requests. In addition, repeated efforts to meet with Capitol Police Chief Steven A. Sund concerning the USCP’s agenda have been rebuffed, and the Public Information Office is unhelpful and unresponsive.”

The USCP’s media office did not return calls and emails seeking their comments for this story, either.

Demand Progress also found that “the USCP routinely goes beyond the mission of protecting Congress, both in terms of the people they interact with and the role that they play. Capitol Police officers make arrests on and off the Capitol complex, with nearly 10% of annual arrests made at Union Station; a significant number of arrests are for traffic violations or drug use; and the majority of ‘incidents’ occur outside of business hours. When the USCP is acting in a law enforcement capacity, it should be held to similar standards as other law enforcement agencies. When it acts like a federal agency, it should be held to account like all federal agencies.”

The group called on USCP to publish annual reports similar to local police departments, to create a FOIA process, to publish Inspector General reports, to publish its internal complaint process and to start using its social media accounts.

If you add all of these factors together, you end up with a secret police force that is ripe for abuse – a team of modern-day witch hunters willing to do whatever the politicians in charge desire.

It all comes down to whom they consider a threat.

We all know what the Biden/Harris administration and Democratic congressional leaders think of gun owners. Once you disagree with their gun-confiscation plans you’re labeled a “violent extremist.” Are we now going to become the subject of secret police investigations? Will our calls, emails and get-togethers be monitored? Are our civil rights up for violating? How would we even know? You can’t FOIA the USCP for documents bearing your name like you can the FBI and local law enforcement.

And the sad part is that this whole crazy scheme isn’t even necessary. Local law enforcement is handled best by local officers, certainly not secret federal police.

The bottom line is this: America was founded on personal freedoms and individual liberties. We certainly don’t need to create an American version of the KGB, Stasi or Mukhabarat.

If you think this is too farfetched or that it can’t happen here, wait till one of Joe Biden’s door-to-door goons asks to see your vaccine passport. Maybe that will change your mind.

Nowadays, it seems Orwell got nearly everything right except the title, which he only missed by 37 years.