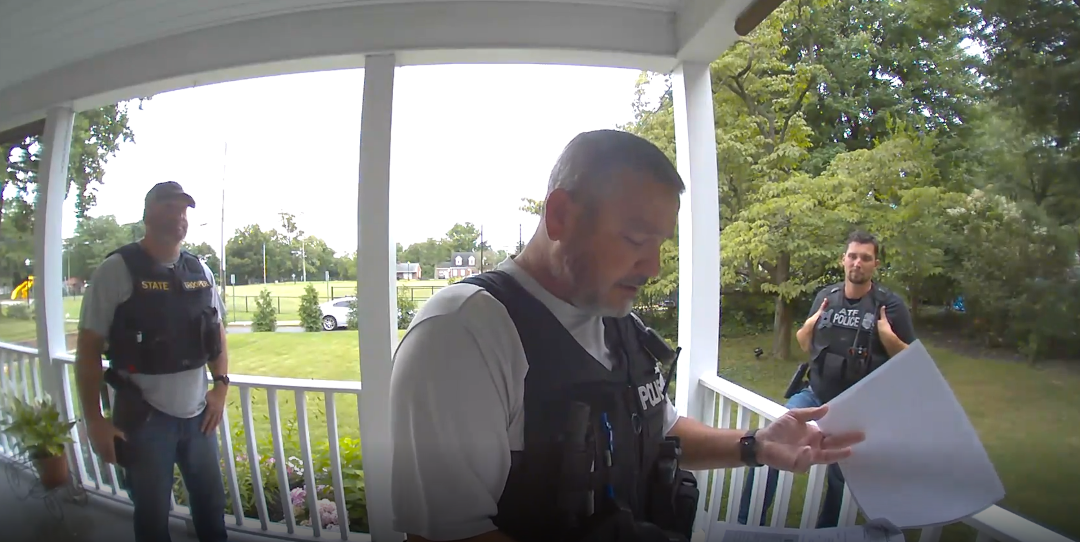 The homeowner was alerted there were trespassers on his property by motion detectors outside his front door. A live video feed from his doorbell camera showed three armed men wearing tactical vests, t-shirts and jeans. Two appeared to be ATF agents. The third was a Delaware State Police trooper. None wore body cameras.

The homeowner, who did not want his name used in this story, is a small businessman – a law abiding citizen who even ATF acknowledged had done nothing wrong. He went to his front door hesitantly. He left his doorbell camera running to record the encounter.

The homeowner confronted the three men before they reached the door. “Can I help you?” he asked, stepping onto the porch.

The older ATF agent told him they were assigned to a task force investigating straw purchases. A straw purchase – a federal felony – occurs when someone buys a firearm on behalf of another person, who is unable to legally purchase a firearm themselves.

The agent said they were verifying that people who bought multiple firearms still had the guns in their possession. The homeowner had bought seven firearms since January 2022.

He asked the men for identification, which the agents and trooper produced. They admitted they did not have a search warrant. The doorbell camera recorded what happened next.

Agent 1 – “All I’m doing is verifying that you have it, you got two different purchases. If you have them, I’m out of here. That’s how quick it is. Yeah. Do you have them with you by any chance?”

Agent 1 – “If you can unload them and bring them out. We can go out to your foyer here, check them out, write the serial numbers and we’re out of here.”

Trooper – “The reason we’re out here is obviously gun violence is at an uptick. We want to make sure – we’ve been having a lot of issues with straw purchases. One of the things, indicators we get is someone making a large gun purchase, and then a lot of times we’ve been there and ‘Oh, those guns got taken.’”

Agent 1 – “The idea is that when you purchase more than two guns at a time it generates a multiple sales report and it comes to us and we have to check them out. That’s all that is. You did nothing wrong – absolutely zero.  I noticed you were stopped in Philly though with one of your guns?”

Agent 1 – “Oh no. It just came up. We came here, look, I’m telling you. There’s an email from the federal side saying can you make sure this guy’s got his guns. If you recently purchased a whole bunch of guns, if we can look at them and just scratch them off…”

Homeowner – “I have them all.”

Agent 2 – “We can look at them and write which ones you just bought, so we can save a trip from coming back. We’ll confirm that you have them.”

The homeowner agreed to get the firearms, closed the front door while the agents remained on the front porch, unaware they were being recorded.

The homeowner retrieved one rifle. The agent checked the serial number off of his list. The homeowner asked if he still needed to retrieve the rest of the firearms. The agents said it wasn’t necessary to see any more. They apologized for the inconvenience, wished the homeowner a good night and left.

Looking back, the homeowner believes he was coerced into giving his consent for what was legally a search of his property, even though no enforcement action was taken against him.

Since the ATF agents did not have a search warrant – they lacked probable cause to obtain one – they had to rely upon extracting consent from the homeowner.

When the courts consider consent, they look at its voluntariness – whether consent was freely given or coerced. They also consider whether the defendant knew he had a right to refuse. Other factors like the time of day and the officers’ demeanor and uniforms can also be considered by the court.

They pushed hard. They were clearly in a hurry, and the threat they might have to return was menacing.

“I was embarrassed,” the homeowner said. “My neighbors saw the whole thing – guys in these police vests standing in my yard. I was really uncomfortable. I felt really confused, like I was in some way being accused of something even though I didn’t commit a crime. It was quite embarrassing. I knew they couldn’t come in, but I didn’t know what to do. I didn’t want to get put on some watch list. We just got new gun laws here. I didn’t want them coming back again. I felt like they were invading my privacy.”

The Resident Agent in Charge of ATF’s Wilmington, Delaware field office did not return calls seeking comment for this story.

Similarly, public information officers at both ATF’s Baltimore Field Division and Washington D.C. headquarters did not return calls or emails seeking comment. This lack of accountability is certainly nothing new for the ATF.

Delaware State Police was also unwilling to discuss this investigation.

Neither Delaware State Police PIO supervisor Sgt. India Sturgis nor Superintendent Col. Melissa Zebley were willing to be interviewed for this story.

“It sounds like your questions would be more appropriately suited for ATF. Please contact them with questions that you have about straw purchases of firearms,” Sgt. Sturgis said in an email.

The only insight into ATF’s surprise home inspections was in a Washington Post story published July 22, 2021, in which Attorney General Merrick Garland announced that the Biden-Harris administration was targeting straw purchasers.

“Going forward, officials said, U.S. attorney’s offices and ATF agents will seek to prosecute more straw purchases — focusing not only on major cities, but also the neighboring towns and states that supply many of the guns used in crimes, including along the Interstate 95 corridor and in Indiana, Nevada and Arizona,” the story states.

Delaware is part of the I-95 corridor. The interstate bisects the state’s most populous county.

Delaware State Police have a proven lack of respect for the Second Amendment. They were once caught maintaining a secret list of gun owners, even though state law required them to destroy firearm records after 60 days. They used the list to illegally thwart at least one firearm purchase. Pairing one of their troopers with the ATF was bound to produce a host of constitutional violations. It was only a matter of time.

These types of warrantless investigations are known as “knock and talks.” They’re usually a tool reserved for narcotics detectives and they’ve always been constitutionally suspect. Police rely upon verbal skills and their powers of persuasion to convince a homeowner to waive their Fourth Amendment rights and let them in. Unlike this case, there’s usually no record of what the cops told the homeowner in order to gain access to the home.

To be clear, if the ATF agents had probable cause to believe this homeowner was actually a straw purchaser, they could have petitioned the court for a search warrant. They didn’t have a shred of probable cause in this case. In fact, all they had was an internal email stating “make sure this guy’s got his guns.”

This homeowner lives in an upscale, affluent neighborhood – a factor that certainly played a role in the agents’ plans. They were counting on the homeowner to let them in quickly, rather than risk a neighbor seeing three LEOs in tactical vests milling around in his front yard.

The fact that neither the ATF nor the Delaware State Police were willing to answer questions, much less defend the actions of their officers, speaks volumes, too. Both agencies mistakenly believe that if they ignore difficult questions they’ll go away.

The best person to stop a straw purchase is a well-trained gun dealer. John Clark of FFL Consultants has trained hundreds of gun dealers.

Clark and business partner John Bocker crisscross the country to help dealers fight back against Biden’s war on guns. Their mantra is: “Get it right the first time.”

“Straw purchases are something we teach all of our FFLs to monitor for,” Clark said. “If someone wants to buy seven Hi-Point handguns, they should ask why someone wants seven of the cheapest handguns they sell.”

“The Golden Rule is this – buy a gun and keep it for at least a year. That will keep you out of the sights of the ATF and law enforcement,” he said. “If you’re buying and selling on the side, you should get licensed.”

Clark was asked about this case – two federal agents and a state trooper wearing tactical vests.

“They could have been a little bit more inconspicuous,” he said. “But that’s the feds.”